Shavlik and AppSense used VMworld Europe 2016 to collect data from frontline experts, and to highlight patch management and security concerns in corporations. 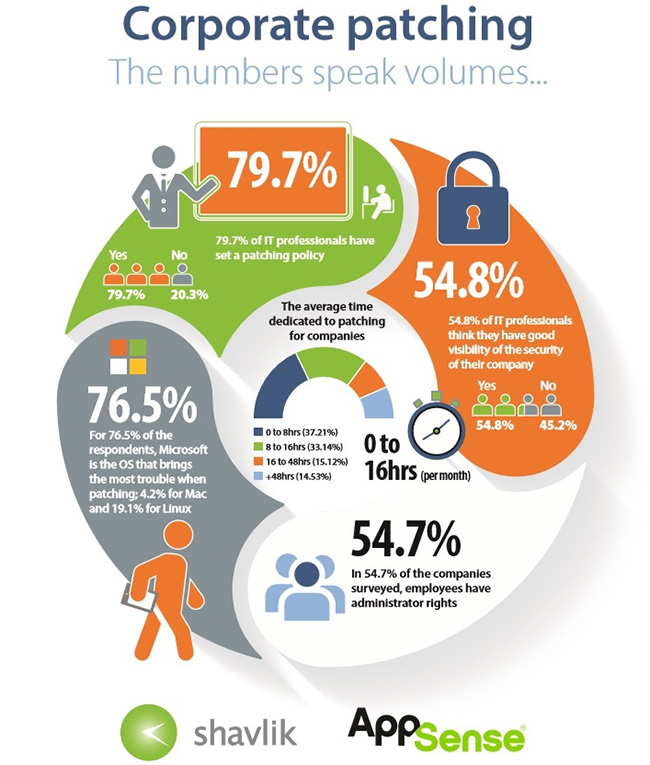 A total of 178 professionals responded to the survey. For 76.5% of them, the Microsoft OS poses the biggest patch challenges for their company. This figure is down from last year’s 86%, so Microsoft seems to be improving. Linux (19.1%) and Mac (4.2%) are also mentioned but to a lesser extent, which can be explained, at least in part, by the smaller number of devices using these operating systems, and fewer patches released for them each month.

Patching the OS is only a small part of the equation when it comes to an effective patch management strategy. When asked about the challenges of patching applications, Java was mentioned as the most difficult application to update by 59% of respondents, followed by Adobe Reader/Flash Player – 38%, Google Chrome – 21%, Firefox – 18% and Apple iTunes – 10%.

Finally, 54.7% of companies grant full administrative rights to their employees, making their systems more vulnerable to malware. This approach increases risk in the event of a malware attack, since there is no way to limit the damage by restricting user rights to infected devices.

“The results of this survey show that the need to establish a patch management policy is recognised by an increasing number of IT departments. Despite this, many companies spend too much time on patch management issues, and manage the rights of their employees in a way that unknowingly promotes risk. This confirms the importance of our work in supporting companies in managing their patches, enabling them to reduce costs, save time and minimise risks to the security of their IT assets,” said Andy Baldin, VP EMEA Shavlik.

Baldin emphasises the importance of facilitating companies’ work to secure and manage their patching: “The results of our study shows that 7% of respondents do not have IT security systems in place or do not know if there is one, 3% have only one backup system, 13% just have antivirus, 7% a firewall and 10% an antivirus coupled with a firewall. This means, 40% of respondents could easily improve their endpoint security.