BitSight analyzed the security posture of some of the world’s largest organizations, and identified the most common system compromises. For comparison, Fortune 1000 companies were studied alongside a random sample of 2,500 companies with a similar industry breakdown and with at least 2,500 employees.

“Understanding the security maturity of Fortune 1000 companies provides greater context for any organization looking to benchmark their own performance,” said Stephen Boyer, CTO of BitSight. “Moreover, this data can be used to better inform companies of the risks posed when sharing data or network access with Fortune 1000 organizations. For example, a primary reason Fortune 1000 companies have a lower median Security Rating is due to higher frequency of system compromise on their networks. Awareness of the incident detection and response practices of third-parties should factor into the process of screening new vendors.”

How do Fortune 1000 organizations fare in securing the services they run on their network? A majority of companies are running at least one remote administration service over an open port with a known vulnerability.

Specifically, more than half (55%) of Fortune 1000 companies are running Telnet without encryption, which can easily allow an attacker to eavesdrop on communications or control a machine remotely. VNC is another remote administration service which poses the risk of unauthorized access of machines. BitSight researchers found that 14% of Fortune 1000 companies have enabled VNC on an open port. 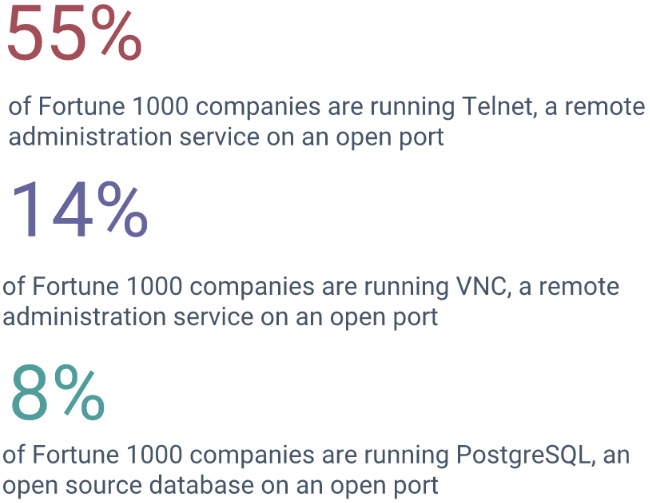