The total security appliance market showed positive growth in both vendor revenue and unit shipments for the fourth quarter of 2016, according to IDC. 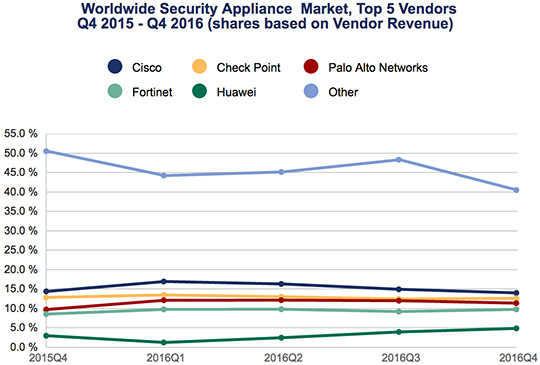 Worldwide vendor revenues in the fourth quarter increased 9.2% year over year to $3.2 billion, and units showed an all-time record high in shipments for a single quarter with 764,974 units and 21.4% annual growth. For the full year 2016, worldwide security appliance revenue increased 8.9% to $11.5 billion when compared to 2015, while worldwide unit shipments increased 17% for a little over 2.7 million units shipped in 2016.

The trend for growth in the worldwide market driven by the Unified Threat Management (UTM) sub-market continues, with UTM almost tripling its size over the last five years and reaching record-high revenues of $5.6 billion for 2016 and year-over-year growth of 16.7%, the highest growth among all sub-markets. The UTM market represents today almost 50% of the worldwide revenues in the security appliance market.

The Asia/Pacific region (including Japan) delivered 28% of the worldwide security appliance market revenue and was the major driver for spending in 2016 with double digit growth. Asia/Pacific (excluding Japan)(APeJ) had the strongest year-over-year revenue growth for 2016 at 18.7% followed by Japan with healthy 16.9%.

The more mature regions of the world – the United States and EMEA – combined to provide around 65% of the total security appliance market revenue globally. Both regions had positive growth in the single-digit range, Europe, the Middle East and Africa (EMEA) showed an annual increase of 6.8%, while U.S. annual growth was 5.1% compared to 2015.

“Over the last quarter, there has been growth in every region with particularly strong growth in Asia/Pacific. Firewall and UTM continue to be the strongest areas of growth,” said Elizabeth Corr, research analyst, Security Products at IDC.