An analysis of the patch updates among the five leading wireless carriers in the United States found that 71 percent of mobile devices still run on security patches more than two months old. Six percent of devices run patches that are six or more months old. Without the most updated patches, these devices are susceptible to myriad of attacks, including rapidly rising network attacks and new malware, also detailed in the report.

In tech city centers, Boston topped a list of tech cities with the largest growth in network incidents with a more than 960 percent increase. Skycure also found that common malware grew by more than 500% from the first quarter to the fourth quarter of 2016.

A huge number of Android vulnerabilities were identified in 2016, rising to more than four times the number in 2015. Almost half of those vulnerabilities allowed excessive privileges, while others allowed other bad effects, like leakage of information, corrupted memory, or arbitrary code execution.

Because carriers must make Android patches available to their users before they can patch their devices, Skycure analyzed devices on AT&T, MetroPCS, Sprint, T-Mobile, and Verizon to determine the age distribution of security patches on the leading carriers. 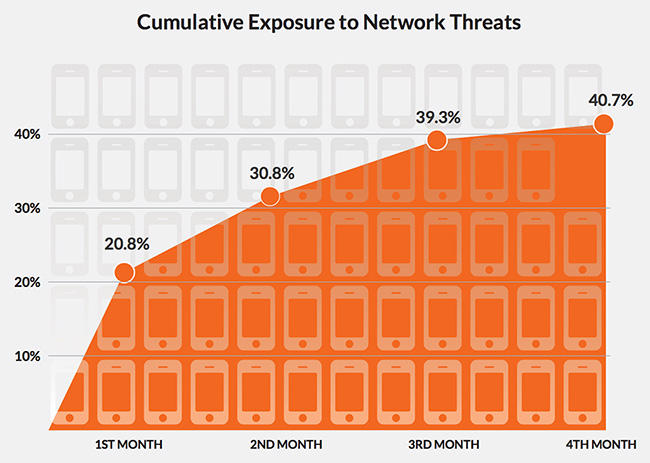 Skycure also tracked trends in network incidents over 2016. To highlight the rise in risk of network attack for mobile devices, researchers analyzed network incidents in the major technology centers of the US over the course of the year. They found: