Facebook has announced new products and redesigns of old ones during its annual F8 developer conference, as well as changes meant to reassure users that the company is doing something about user privacy and about controlling the negative effects its products have on various aspects of society.

Among these is a new privacy control called “Clear History” that Facebook is building and will make available to users soon. 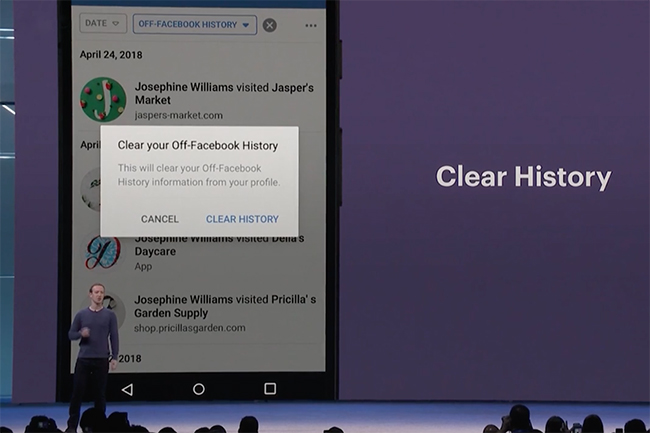 “In your web browser, you have a simple way to clear your cookies and history. The idea is a lot of sites need cookies to work, but you should still be able to flush your history whenever you want. We’re building a version of this for Facebook too,” Facebook CEO Mark Zuckerberg explained.

Apparently, the tool will allow users to see what information Facebook sees about their use and interaction with websites and apps that use Facebook’s ads and analytics tools.

When it comes to creating tools and processes to minimize abuse on the platform – whether its the spread of fake news, actual user abuse, influencing election integrity or other damaging occurrences that arise from the introduction of new features and products – Zuckerberg says that they are already working on it, but it will take a minimum of three years to fix what’s wrong with Facebook.

Among the new products announced at the conference is also a new Facebook service called Dating.

Those who want to use it will have to set up a separate profile for it, and the company promises not to allow the two to intermingle and not to show to your friends and family anything about what’s going on on that profile. Also, Facebook won’t be suggesting users’ friends as potential matches.

The company is obviously trying to regain the trust of users and prevent them from leaving the platform altogether, and it is likely to be successful at that. Many users don’t feel they have a good enough alternative and is easier for them to, for the umpteenth time, to put their trust in Facebook instead of incurring social and economic penalties of ditching it.

Only time will tell whether the Dating service will gain traction, but given the huge number of Facebook users, it’s probable that millions will not think twice about giving Facebook even more insight into their private lives than before.