Another group of researchers has demonstrated that hard disk drives (HDDs) can be interfered with through sound waves, but they’ve also shown that ultrasonic signals (i.e., sounds inaudible to the human ear) can be used to damage their integrity and availability. 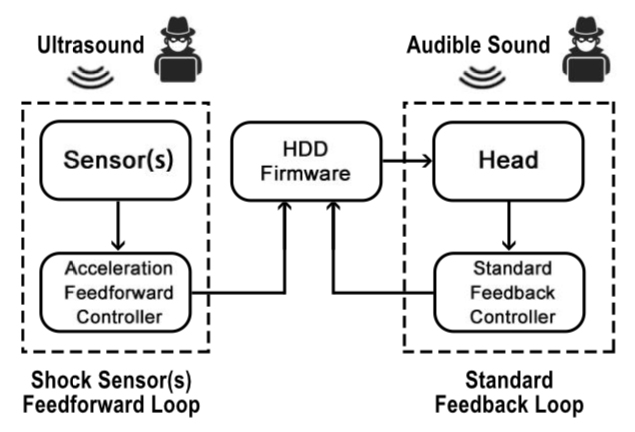 HDDs are non-volatile data storage devices that store and retrieve digital information by using rapidly rotating disks coated with magnetic material and magnetic heads that read and write data to the disks’ surfaces. They are usually found in personal computers, cloud servers, consumer electronics, CCTV systems, medical monitors, ATMs, and so on.

Late last year, a group of researchers from Princeton and Purdue University demonstrated a new denial-of-service (DoS) attack against HDDs, which exploited a physical phenomenon known as acoustic resonance.

They showed that vibrations caused by specially crafted acoustic signals can cause significant vibrations in HDDs’ internal components and therefore negatively influence the performance of HDDs embedded in real-world systems.

As effective as they could be, such attacks are unlikely to remain unnoticed. But, according to a recently released paper by researchers from the University of Michigan and Zhejiang University, even ultrasonic signals (above 20 KHz) can bring about physical errors in hard disk drives and therefore lead to system level errors.

“A HDD read/write head floats (∼10 nm) above the surface of each spinning disk. Data is organized in tracks that circle the disk. To read or write data, the head stack assembly must position the head above the desired track. There is a narrow margin of error (on the scale of nm) within which the read/write head can operate,” the researchers explained.

“Ultrasonic waves can alter the HDD shock sensor’s output, causing a drive to unnecessarily park its head. Audible tones can vibrate the read/write head(s) and disk outside of operational bounds. Both of these different methods result in improper function of the drive.”

These attacks can be executed via nearby sound emitters and, occasionally, even through the target system’s own built-in speakers (it all depends on their frequency response).

“Ultrasonic attacks are less likely to cause a head crash, but could be damaging the drive in other ways such as causing the head to become unstable over time because of excessive parking. This instability could make the drive less reliable in its reads and writes, leading to sectors being marked as bad,” the researchers noted.

They propose a number of defenses that can be used to detect or prevent these attacks, including a feedback controller that could be easily deployed as a firmware update to attenuate the intentional acoustic interference.