Consumers say the biggest benefit of smart home technology is security and peace of mind (37%), followed by making life easier.

Belfast is the UK’s smartest city, with 77% planning a smart home purchase in the next six months. By comparison, 65% of Londoners are planning a similar purchase.

Those who already own smart home equipment spent £156.45 per household in the past year, and a majority (52%) are considering a purchase in the next six months. Smart lighting (22%), smart thermostats (18%) and smart security equipment (17%) top consumers’ shopping lists.

Swann’s research shows that voice control is close to reaching ‘tipping point’ in the UK, as 49% have used voice control. However, just 17% own home security equipment.

Consumers said they’d be most upset if sentimental items such as pictures and mementos were stolen from their home, suggesting consumers should be investing in smart indoor security cameras. 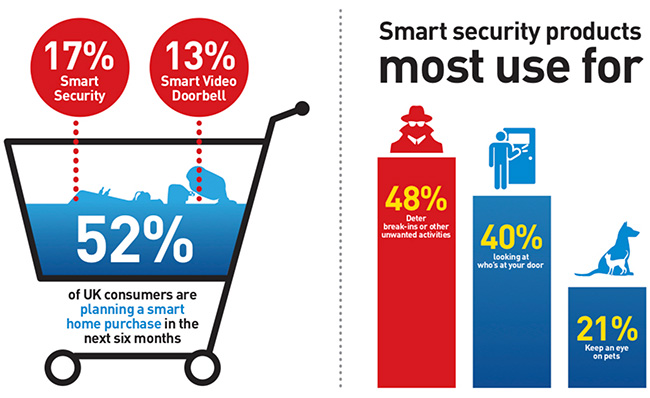 Consumers should beware. A recent Dynatrace study found that while 52% of consumers worldwide are now using IoT devices, 64% of those have already encountered performance issues. On average, consumers experience 1.5 digital performance problems every day, and 62% of people fear the number of problems they encounter, and the frequency, will increase due to the rise of IoT.

IoT devices are often left on the edge of the network, forgotten. Much like a rotten door somewhere on the furthest side of a big house, they become an easy entry point for hackers. Following best security practices can reduce the risk, but it is not enough to protect the network from hackers trying to compromise these devices.