Just 10 percent of major automotive companies are implementing artificial intelligence (AI) projects at scale, with many falling short of an opportunity that could increase operating profit by up to 16 percent. 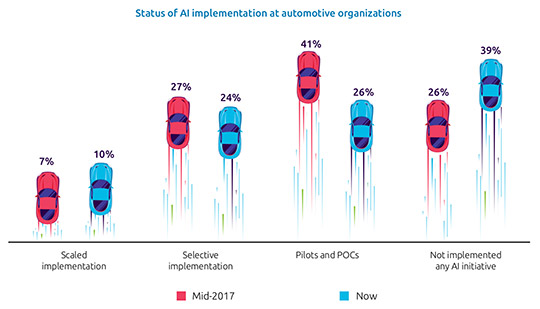 Fewer automotive companies are implementing AI than in 2017, despite the cost, quality and productivity advantages.

The “Accelerating Automotive’s AI Transformation: How driving AI enterprise-wide can turbo-charge organizational value” study from the Capgemini Research Institute surveyed 500 executives from large automotive companies in eight countries, building on a comparable study from 2017, to establish recent trends in AI investment and deployment.

The research highlighted the following potential reasons for the modest progress in relation to AI implementation:

Scaling of AI has seen a slow growth

Since 2017, the number of automotive companies that have successfully scaled AI implementation has increased only marginally (from seven percent to 10 percent). However, the increase in companies not using AI at all was more significant (from 26 percent to 39 percent).

According to the report, just 26 percent of companies are now piloting AI projects (down from 41 percent in 2017). This is maybe due to companies finding it harder to realize a desired return on investment. The results also reveal a significant regional disparity, with 25 percent of U.S. firms delivering AI at scale, compared to nine percent in China.

The modest progress in implementing AI projects at scale represents a major missed opportunity for the industry.

Modelling in the report, based on one typical top 50 original equipment manufacturer (OEM), estimates that delivering AI at scale could achieve increases in operating profit ranging from five percent (or $232m) based on conservative estimates, to 16 percent (or $764m) in an optimistic scenario.

“With AI-empowered visual inspection we have sensibly reduced the ratio of false positives with respect to the previous systems,” said Demetrio Aiello, head of the AI & Robotics Labs at Continental. “I am very confident that if we can deploy AI to its fullest potential it would have an impact on performance equivalent to almost doubling our capacity today.”

The report showed that the industry has become more positive about AI’s job-creation potential – 100 percent of executives say that AI is creating new job roles, up from 84 percent in 2017.

Where AI is being deployed, it is achieving results

The survey found a consistent story of AI delivering benefits across every automotive business function. On average, it delivered a 16 percent increase in productivity across Research and Development (R&D), operational efficiency improvements of 15 percent in the supply chain and 16 percent in manufacturing/operations, reduced direct costs of 14 percent in customer experience and 17 percent in IT, and reduced time to market by 15 percent in R&D and 13 percent in marketing/sales.

Additionally, a number of successful AI projects are identified and detailed in the research report. One example is Continental generating 5,000 miles of vehicle test data an hour through an AI-powered simulation, compared to 6,500 miles a month it was getting through physical test driving.

Markus Winkler, Executive Vice President, Global Head of Automotive at Capgemini concludes, “These findings show that the progress of AI in the automotive industry has hit a speedbump. Some companies are enjoying considerable success, but others have struggled to focus on the most effective use cases, vehicle manufacturers need to start seeing AI not as a standalone opportunity, but as a strategic capability required to shape the future which they must organize investment, talent and governance around.”

He continues, “As this research shows, AI can deliver a significant dividend for every automotive business, but only if it is implemented at scale. For AI to succeed, organizations will need to invest in the right skills, achieve the requisite quality of data, and have a management structure that provides both direction and executive support.” 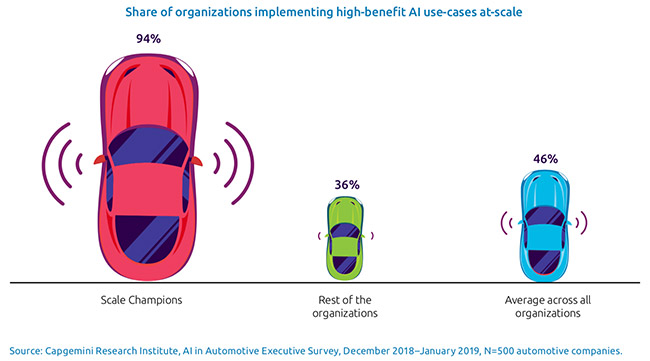 To deliver at scale, companies must invest, upskill and create infrastructure

The report also examined the behaviors of the companies in the survey who have had the most success implementing AI at scale (‘Scale Champions’). It found they had typically,