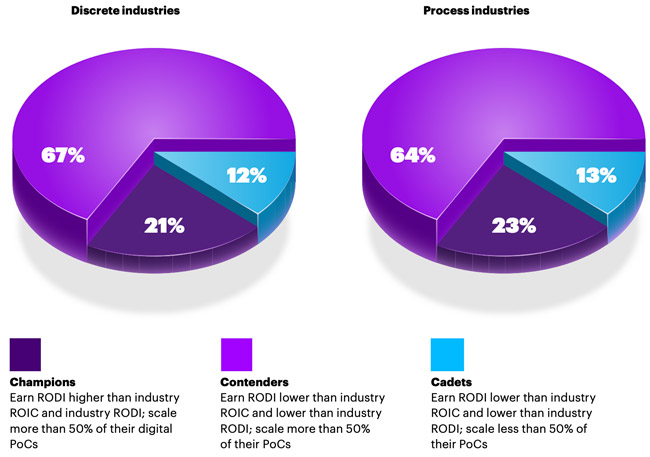 These “Champions” consistently scale more of their proofs of concepts (PoCs) and achieve higher-than-average returns on their efforts compared to their peers.

For the new Industry X.0 research, which was unveiled at Hannover Messe in Germany, Accenture surveyed 1,350 senior and C-suite executives from industrial businesses across 13 industries, representing both discrete and process manufacturing.

The key finding: while all companies surveyed were investing to scale their innovation efforts beyond the PoC stage, only a small group of them — the 22 percent Champions — reached expected earnings.

“The key question is, therefore — how can companies succeed at it? The Champions we found in our research are very strategic. They leverage four specific management best practices to specify the value they’re seeking to create, and then focus on changing their organization. To them, it’s not about scaling more — even though they do that — it’s about scaling better.”

The rewards for being a Champion

The best-performing companies in the sample scale more than 50 percent of their PoCs. They also expect much higher returns from their efforts than their peers. Most importantly, they tend to not only meet these high expectations — but to exceed them.

Accenture’s research found that, on average, Champions expected a Return on Digital Investment (RODI) of 22.3 percent — but realized 25.5 percent.

The other 78 percent of companies reported RODI figures far below these. “Contenders” — the group of about 65 percent of the sample that scales nearly as many PoCs as the Champions — said they expected returns of 7.2 percent.

But they were only able to realize 6.4 percent, effectively earning RODI below industry average. The companies in the third and last group — “Cadets” — scaled less than half of their PoCs and realized 9.9 percent RODI, missing their target of 11.25 percent.

The research also indicates how Champions manage to be so much more successful than their peers: All the companies in the best-performing sample cluster tend to take four specific actions to drive the scaling-up of their innovations:

“Successful digital reinvention can only be driven from within, with digital capabilities that sit inside the core functions of a business”, said Aidan Quilligan, managing director and global lead for Accenture Industry X.0.

“Champions know this. They first pinpoint what their customers most value, and then build digital factories to bring the might of their entire organization behind delivering that very value. This is how they overcome the challenges to innovation that all companies are facing.”

The challenges to innovation

Findings from the research make it very clear how a company’s capability to scale digital innovation is closely correlated to how it manages six specific organizational challenges: management alignment, measurement of digital value, skills, technology infrastructure, management of partnerships, and company culture.

The report offers an econometric model that establishes a correlation between the management of these challenges and RODI, indicating how much companies could boost their RODI by better managing any of the six issues.

“The data makes a compelling case that successful scaling is a function of organizational management,” said Dave Abood, senior managing director and growth and strategy lead for the Accenture Resources operating group.

“Contenders and Cadets can increase their returns on digital investment significantly by copying what the Champions are doing, for example, to create better alignment and accountability among senior and middle management as well as across organizational boundaries.”