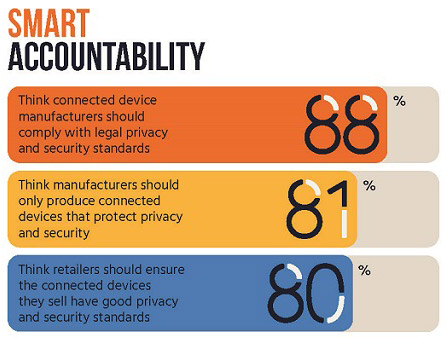 The survey was conducted in the United States, Canada, Japan, Australia, France and the United Kingdom.

Connected devices are everywhere and many people are willing to be part of the Internet of Things (IoT) revolution. 69% of those surveyed said they own connected devices, such as smart meters, fitness monitors, connected toys, home assistants, or gaming consoles.

However, testing by multiple consumers organizations has found a range of products are rushed to market with little consideration for basic security and privacy protections.

The survey results show that 77% of consumers across markets said information about privacy and security are important considerations in their buying decisions and almost a third of people (28%) who don’t own a connected device don’t buy smart products because of these concerns. Consumers see this broadly as much of a barrier as cost.

“The survey results underscore the need for IoT manufacturers to build their devices with security and privacy in mind,” said Internet Society President and CEO Andrew Sullivan. “Security should not be an afterthought. It’s clear that manufacturers and retailers need to do more so that consumers can trust their IoT devices.”

Those surveyed also believe that accountability for connected device concerns should sit with regulators, manufacturers and retailers. 88% percent of survey respondents said that regulators should ensure IoT privacy and security standards, while 81% of people said manufacturers need to provide that assurance, and 80% said retailers must address privacy and security. 60% of participants across markets think consumers to be mainly responsible for the security and privacy of their connected devices. 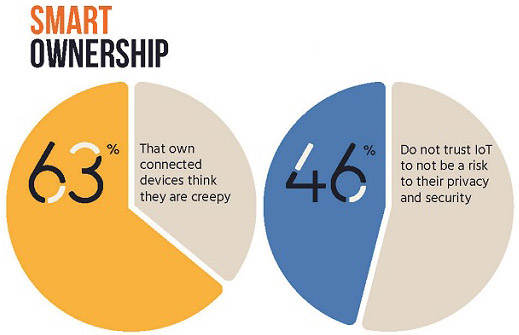 Helena Leurent, Director General, Consumers International said: “Consumers have told us they accept that they have some responsibility for the security and privacy of their IoT products but that isn’t the end of the story. They, and we, want to see tangible action from manufacturers, retailers, and governments on this issue. It has to be a collective effort, not the responsibility of one group.

“We are exploring this conversation with progressive manufacturers. Together we are looking at the opportunity to create person-centered technology, that people not only enjoy using, but feel safe and secure doing so. By doing this business can address the concerns of those not engaging with this tech, and open up the benefits of the Internet of Things to everyone.”

Other key results from survey participants show that: