Apricorn, the leading manufacturer of 256-bit AES XTS hardware-encrypted USB storage devices, announced the release of the Central Database version of the Aegis Configurator for both PostgreSQL and Microsoft SQL Server. 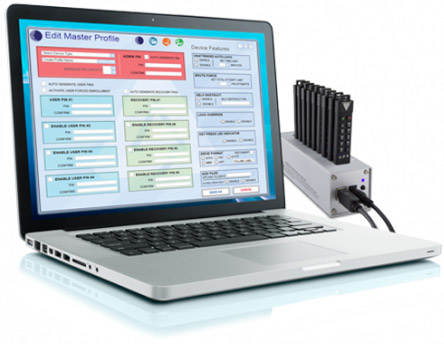 In addition to the original Aegis Configurator feature set, the Central Database version allows for a corporate license to create and store Aegis Secure Drive configurations, settings, and logfiles on a corporate-wide server, either online or on-prem, an unlimited number of admins / users, and four levels of user group access with preset role permissions for each.

At the core of the Aegis Configurator is the ability to implement specific components of a corporate data security policy by provisioning authorized encrypted devices en masse prior to deploying to employees.

With centralized configurator profile implementation, data security policies are set at the device level rather than the employee level. Used in conjunction with whitelisting software, the Aegis Configurator diminishes the chances of corporate data breach by taking employee error or negligence out of the equation.

“Since its initial launch in 2016, the Aegis Configurator has been a real game-changer for IT admins deploying large numbers of Apricorn secure devices at once,” said Mike McCandless, vice president of sales and marketing at Apricorn.

“Not only does it save a ton of time, the Configurator automates the enforcement of specific data security policy points at the same time. Before the Configurator, if several devices were to be deployed corporate-wide, each would either have to be set up one at a time by the IT Admin or trusted to the employees to set up themselves.

“The Central Database version takes mass deployment capabilities to new heights where hundreds, even thousands of Aegis secure drives can be configured in a matter of seconds from various departmental servers within a corporation for deployments on a much grander scale.”