Micro Focus released Micro Focus AD Bridge 2.0, offering IT administrators the ability to extend Active Directory (AD) controls from on-premises resources, including Windows and Linux devices to the cloud – a solution not previously offered in the marketplace. 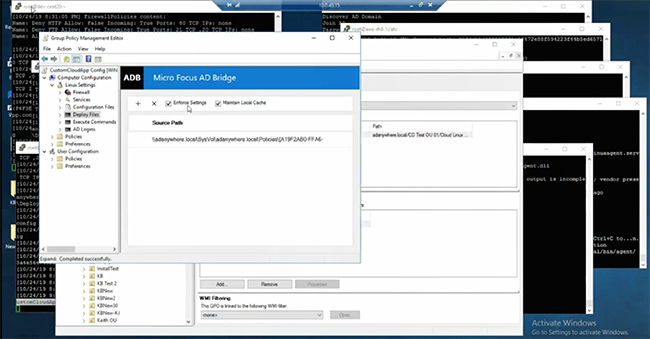 With AD Bridge 2.0, organizations can leverage existing infrastructure authentication, security as well as policy, in order to simplify the migration of on-premises Linux Active Directory to the cloud, resulting in fully secured and managed Linux virtual machines in the cloud.

“We have optimized Azure to fully support Linux virtual machines because we recognize that Microsoft users want the freedom to leverage a variety of operating systems in the cloud,” said Boris Baryshnikov, Principal Program Manager, Microsoft.

It is estimated that 95% of enterprises use Active Directory to manage security and configuration for their Windows environment. The newest version of Micro Focus’ hybrid policy management solution allows organizations to take advantage of AD configurations and security controls and apply them to cloud-based resources.

The patented technology takes the standard Group Policy Objects (GPOs) already in use by many businesses, and extends them beyond the walls of the corporate network to cover cloud-based resources that are potentially unmanaged today.

“We have customers that are currently managing thousands of GPOs for their on-premises systems and have invested significant time and money in fine tuning and deploying policy to protect their Windows assets,” said Nick Nikols, VP of Strategy at Micro Focus.

“The release of AD Bridge 2.0 helps them achieve that and more by providing even more control over resources such as on-premises and cloud-based Linux.”

As Linux continues its rise to a more dominate cloud deployment solution, it’s critical for organizations that are adopting cloud based-solutions like Azure and Office 365 to implement stricter policy-level controls to cloud-based Linux and Windows systems, providing consistency and peace of mind, while also delivering simplified compliance.

Micro Focus AD Bridge 2.0 joins the growing portfolio of Identity and Access Management solutions offered by Micro Focus and introduces an intuitive web-based administrative console, which includes the ability to view agent versions, applied policies, and other key features, including:

“Efficiently managing security and configuration policies on cloud-based Linux resources is a challenge that the marketplace hasn’t been able to effectively solve until now,” said Danny Kim, CTO at Full Armor.

“Partnering with Micro Focus on AD Bridge 2.0 provides a real solution that unifies Windows and Linux resources and centrally manages them from Active Directory.”