Shujinko launched AuditX, a SaaS platform that simplifies, automates and modernizes the enterprise cloud security compliance audit process to make it up to 3x faster and dramatically simpler. 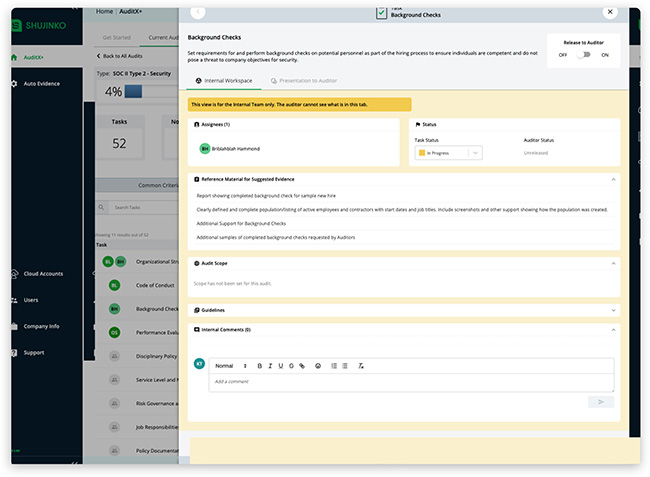 “Research shows more than 70% of CISOs are facing multiple upcoming audits while struggling with poor tools, conflicting priorities, limited resources and now remote management. They all want an automated and more efficient process, something AuditX was purpose-built to deliver. It’s the exact tool I wish we had when I was responsible for information security and compliance at Starbucks.”

AuditX eliminates much of this compliance work by translating complex standards requirements and controls into easily understandable tasks for teams, allowing them to spend less time on audits and more on top company growth priorities.

AuditX automates evidence collection, maps evidence across multiple controls and across different standards, streamlines audit workflow and clarifies communication across teams and with auditors. AuditX organizes evidence in a centralized library for final readiness review and provides a 360-degree dashboard to make the entire process highly visible and predictable.

“Automation is key to our business, so naturally I’m a huge fan,” said Udo Waibel, CTO at Oomnitza. “I’ve done audits manually, and it’s a tremendous amount of labor. Automation eliminates that, while also grabbing the metadata that’s difficult – or impossible – for people to get on their own.”

“The audit became a process that all of us could track, and readily understand in terms of completion percentage,” said Krishna Bhat, co-founder and CEO at Kloudio. “That became particularly useful as I kept the board and investors apprised of our rapid progress, and how it was impacting our time to market.”

AuditX and AuditX+ (with Automated Evidence Collection) are available immediately as a software subscription.