The data center market in Europe is expected to grow at a CAGR of over 4% during the period 2021-2026, according to ResearchAndMarkets. 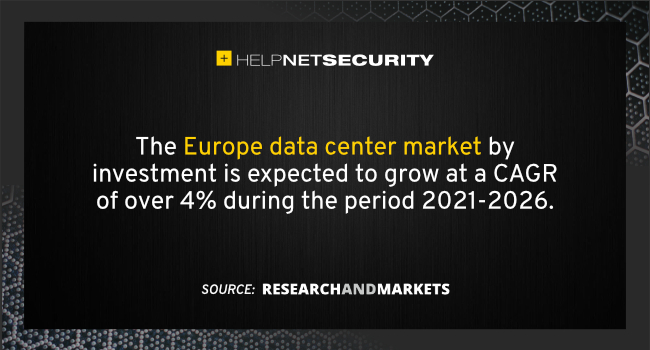 The market is expected to grow due to the growing procurement of renewable energy sources. Over 25 European cloud and data center operators, including AWS, Google, Equinix, Interxion, OVH Cloud, Scaleway, Aruba, and 17 other industry associations have signed an agreement to make their facilities carbon neutral via 100% renewable energy sources by 2030.

According to the Climate Neutral Data Centre Pact, 75% of the power supplied to data centers in Europe will be supplied through renewable energy or carbon-free energy by December 31, 2025, and the objective is to reach 100% by December 31, 2030. This announcement is likely to offer a high impetus to the growth of the data center market in Europe. Hyperscale data center providers are the major investors in renewable energy initiatives.

Enterprises are shifting to high-performance and capacity-intensive infrastructure. The high consumption of internet-based services is expected to drive the IT infrastructure market. The COVID-19 pandemic fueled infrastructure adoption among internet-related service providers in Q1 and Q2 2020. Hyperscale operators procured ODM infrastructure, which grew by over 10% across Europe in 2020.

UPS systems are the highest contributors to market investment. In 2020, the adoption of lithium-ion UPS systems grew considerably. Most data centers operating in Europe are adopting N+N redundant infrastructure. The adoption of generator systems with a capacity of over 2 MW is high due to the increased construction of large and hyperscale facilities.

Data center operators have adopted innovative and energy-efficient cooling infrastructure solutions, aiming to reduce power consumption by up to 50%. This is expected to grow during the forecast period as market vendors are introducing innovative high-efficient cooling systems.

The server infrastructure market has witnessed strong growth over the last two years. Server systems based on x86 architecture dominated the Europe data center market share with over 85% in 2020.

Most modern operators adopt the server infrastructure that matches workload requirements. The demand for servers suitable for cloud environments is likely to grow during the forecast period. In 2020, the increased adoption of all-flash storage arrays along with sizable contribution from hybrid storage arrays is expected to aid storage systems.

The growth of flash storage systems is boosted by high-performance operations that require strong input/output capabilities. The increase in bandwidth requirements, data center consolidation, and virtualization are some major factors driving the demand for ethernet port switches, controllers, and adaptors. 25/50 GbE switches are likely to experience considerable growth during the forecast period.

In the Nordic region, the deployment of hyperscale facilities is likely to fuel the procurement of 48V DC UPS systems. Most facilities in the region are powered by renewable energy with grid stability of over 95%.

This reduces the number of redundant generator systems, encouraging 2N UPS system installation. A majority of data centers in central and eastern Europe are designed as Tier III standards with a minimum of N+1 redundancy in UPS and generator systems. The use of renewable energy sources to power data centers is low in the region. However, their utilization is expected to grow during the forecast period.

Western Europe is the most active market for data center construction across the European region. The increase in demand for cloud computing and other related services has offered several revenue opportunities for multiple and sub-contractors in the market. Many facilities are being designed and built to cover an area of over 100,000 square feet.

Several major data center construction in the region is managed by Europe-based construction service providers. However, the non-availability of a skilled workforce to manage multiple hyperscale projects is the major challenge for several contractors in the region.

According to the Uptime Institute, Europe has around 217 certified data centers spread over 29 countries, which include local and global facilities. A majority of them are in the UK, Russia, Spain, Lithuania, Luxembourg, Italy, and France. Europe has higher Tier III certified facilities than Tier IV and Tier II. Around 163 facilities in Europe are Tier III certified. Russia, the UK, Spain, Italy, and Lithuania have the highest number of certified data centers.

The following factors are likely to contribute to the growth of the Europe data center market during the forecast period: