Portworx released findings from its survey which assesses the mass adoption and evolution of Kubernetes usage among enterprise users in the last 12 months, in addition to the impact of the pandemic on IT users’ attitudes towards their jobs. 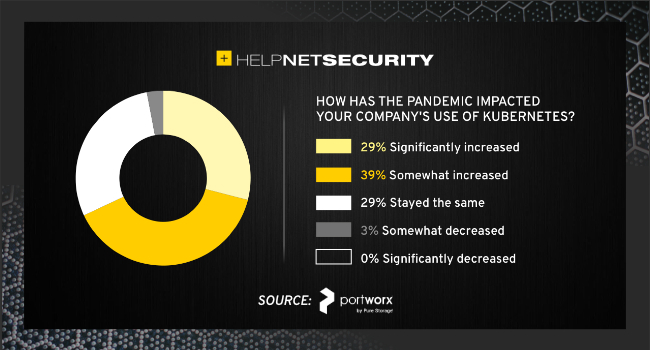 The findings suggest that despite budget cuts, enterprises are rapidly turning to Kubernetes to drive faster business results and, overall, reported happier, well-paid IT employees.

For over a year, the pandemic has challenged businesses everywhere to experiment and innovate their offerings to cater to evolving customer demands for convenience and simplicity, as well as supporting employees in the new world of remote work. In the midst of it all, Kubernetes has played a critical role.

The survey found that 68 percent of IT professionals said they increased their usage of Kubernetes as a result of the pandemic, primarily to accelerate their deployment of new applications and increase their use of automation – both of which are critical to meeting customers and employees where they are today.

What’s more, despite added working pressures, 52 percent of IT professionals enjoyed their jobs more than they did before, with those most familiar with Kubernetes tending to earn higher salaries.

The role of Kubernetes is expanding

Enterprises are increasingly leveraging Kubernetes to develop and test artificial intelligence models, and to manage and automate storage, network, and compute infrastructure.

Nearly 90 percent of IT professionals expect Kubernetes to play a larger role in the management of their infrastructure over the next 2-3 years.

Speed of deployment is king

Amid the pandemic, businesses had to quickly adapt to a fast-changing world by rolling out new apps to better serve customers, building algorithms to reorganize disrupted supply chains, and more.

Kubernetes is a cost-saver

2020 created financial uncertainty for many businesses, and minimizing wasted expenditure became a priority. 46 percent of respondents said they increased their use of Kubernetes last year to help reduce IT costs. Of those, 27 percent expected to reduce IT costs by 31 percent or more.

“Kubernetes adoption is continuing to grow as an essential strategy to capitalize on modern data and applications. With its easy scalability, portability, and fast iteration cycle, the technology is the most effective way to enable rapid developments and innovation,” said Murli Thirumale, VP, GM Cloud Native Business Unit, Pure Storage.