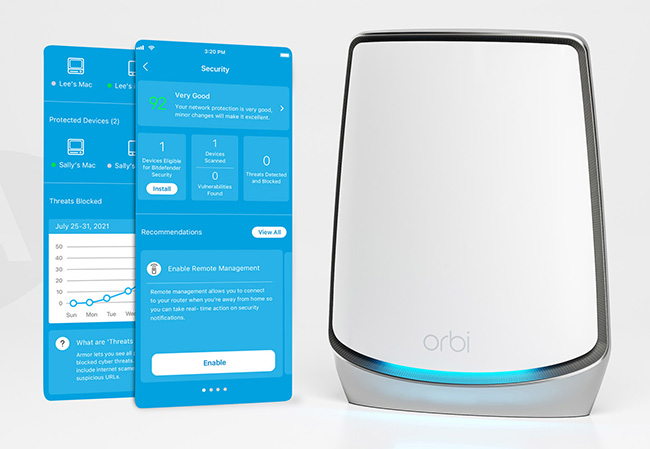 While about 80 percent of Americans have some kind of antivirus software installed on their computers, the 25 or more connected devices in a typical smart home remain vulnerable to threats that can provide attackers with a backdoor into home networks, leading to severe usability and performance issues as well as theft of sensitive personal data such as passwords, credit card information and social security numbers.

Connected devices from different manufacturers increase the chance of not only incoming attacks, but also outgoing threats such as a home security camera trying to send data to a rogue site. To help thwart such threats, NETGEAR is adding new capabilities to its flagship security offering, providing simple and comprehensive network and device protection.

Unlike traditional endpoint antivirus products, NETGEAR Armor is built into the router to monitor activity going to and from the internet, protecting the devices on your network and eliminating the need and cost for multiple security subscriptions or software.

“With the explosion of connected devices in the home from baby monitors to smart TVs, all of which can be compromised, we understand how overwhelming it can be for individuals and families to know what to do to keep themselves and their information safe,” said David Henry, President & GM of Connected Home Products and Services at NETGEAR.

“We realized that a new type of security solution was needed and with this version of NETGEAR Armor, we take worry out of the equation by providing a comprehensive ‘set-it-and-forget-it’ service.”

On top of the already award-winning features of NETGEAR Armor new capabilities include:

For added peace of mind, the latest generation of NETGEAR Armor still comes with Internet threat protection that users can install on their computers, smartphones and tablets at no added cost. This extra protection enables not only greater security at home, but as these devices connect anywhere a customer goes, helps keep them safe from viruses, phishing and other attacks, even if they connect to unsecured networks at coffee shops or airports, for example.

The new and enhanced service is just one part of NETGEAR’s comprehensive suite of services designed to help its customers better protect and manage their connected devices and homes. From the newly enhanced NETGEAR Armor to NETGEAR Smart Parental Controls, which enables parents to monitor and manage children’s screen time – NETGEAR’s portfolio of services is focused on helping its customers protect themselves – and their families.