Fraudsters are increasingly focusing on digital accounts, whether that is by compromising existing user accounts or creating fake new accounts to commit fraud, an Arkose Labs report reveals. 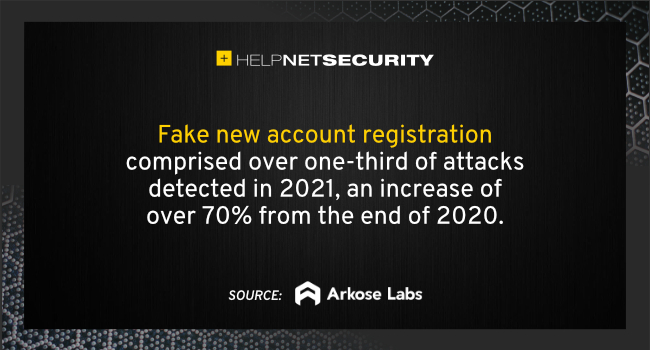 The report also found that attackers are leveraging fraud farms and mobile devices to increase their ability to mimic the way consumers interact today. As mobile continues to be a more predominant channel for consumers to repeatedly access and interact with their favorite platforms, fraud is following suit to blend in with “normal” consumer behaviors.

Digital accounts susceptible to fraud more than ever

Additionally, the report indicated that attacks against logins and registrations are not always independent. More than ever, fraudsters are attacking both of these digital touchpoints, which makes ensuring digital account integrity more vital than ever for businesses.

“Whether they are taking over existing user accounts, or creating fake accounts for a variety of purposes, fraudsters expertly disguise themselves as legitimate users to abuse and monetize digital accounts,” said Kevin Gosschalk, CEO of Arkose Labs.

“With customer-centricity vital for success in this digital world, businesses must enable a seamless account login or registration process, while still being vigilant at monitoring these touchpoints as the starting points of fraud.”

In early 2021, the Arkose Labs team uncovered attacks which first centered on the registration flow, followed immediately by an attack on logins. A declined registration can validate if the account exists already, leading the bad actor to pivot to an account compromise attack. As cybercriminals deploy these multi-pronged strategies, platforms must have an adaptable approach that protects both account entry points.

“Fraudsters continue to diversify the nature of their attacks, as well as attack touchpoints,” said Vanita Pandey, CMO, Arkose Labs. “It’s imperative that businesses protect the full digital perimeter of user touchpoints and closely monitor any signs of suspicious activity.”