Ever since the emergence of PCs, hard disks have become the most prevalent type of storage device. To accelerate the overall data flow of PCs, increase the storage throughput, and further enhance data security of the hard disks, disk arrays were invented. 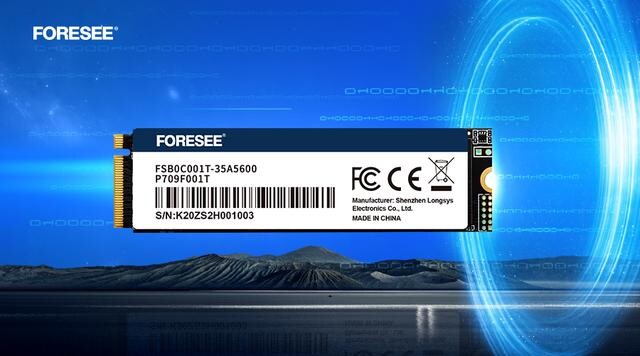 Information and data security is critical for both individuals and enterprises. The safety of DVRs, computer system disks, monitoring servers, banking systems, warehouses and other data and files can determine whether or not an institution survives. Therefore, the safety performance of SSD is a major focal point.

To meet the demand for SSD security and reliability, the FORESEE SSD R&D team launched the P709 PCIe SSD, which, empowered by the TCG-OPAL 2.0 and Pyrite 2.0 encryption functions, ensures data security and avoids data leakage. In addition to the encryption functions, the capacity combination, power consumption and read/write performance of this product can hold its own against the mainstream market standard.

When it comes to compatibility, the FORESEE P709 PCIe SSD has been certified by Intel Modern Standby and UNH-IOL thanks to its excellent low-power performance. Not only does it significantly prolong the battery life of terminal devices, it also ensures product stability by balancing speed and temperatures during continuous operation through the use of temperature control algorithms.

The FORESEE P709 PCIe SSD focuses more on product security. As a result, FORESEE worked with the TCG OPAL technical and software team to incorporate TCG OPAL 2.0 into the product via software and hardware integration. This function allows for fast encryption/decryption by processing information in the device without a host, thereby minimizing the risk of data leakage without affecting system performance.

The Pyrite SSC feature is also a mainstream encryption function. To meet extensive application and market needs, the Pyrite SSC protocol can carry out access restrictions on user data without having to specify encryption requirements. This protocol supports commands in the same way as the Opal SSC, Opalite SSC, and Ruby SSC protocols, with the following features:

Building upon the foundation of Pyrite 1.0, Pyrite 2.0 adds a more rigorous data deletion mechanism and data protection function, enabling it to be used extensively in storage devices throughout Asia, Europe and the United States.

As more and more devices are connected to cloud storage through the Internet of Things (IoT), the openness of data may also result in a variety of information security issues and malicious attacks. Against this backdrop, an integrated information security solution powered by the state-of-the-art encryption technology will be of the utmost importance when it comes to protecting the data of enterprises.

In the future, the FORESEE SSD R&D team will remain focused on product security and delivering an easy-to-use integrated storage solution with high data security to effectively safeguard SSD products.