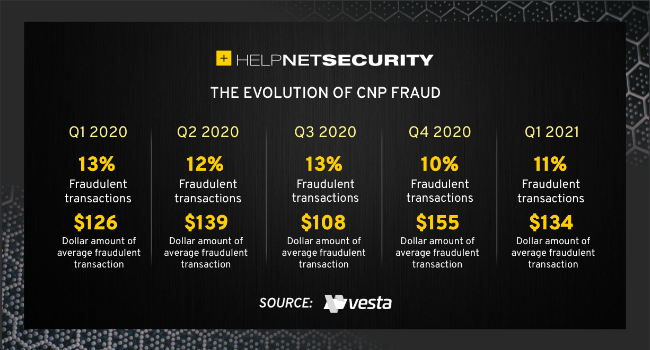 The overall percentage of global transactions its system identified as being potentially fraudulent ranged from 10 to 13%, with the average value of each fraudulent transaction ranging from $126 to $155. Fraud attempts, however, are not evenly distributed: fraudulent attempts at individual merchants ranged from 0.8% to over 30% depending on business vertical and geography.

In the first quarter of 2020, 13% of overall transactions were likely fraudulent, and therefore it blocked those transactions to protect its customers. It is important to remember that 13% is an aggregate number, inclusive of both high and low-risk merchants.

“If you’re an eCommerce business doing 5 million transactions per year and 13% of those are fraudulent, you’re looking at 650,000 bad transactions, and if each one of those comes with a $25 chargeback fee, you’re now looking at more than $16 million dollars in fees,” said Ron Hynes, CEO of Vesta.

“On the other hand, if you decline too many legitimate transactions in an effort to fight fraud, you end up with significant losses. For example, if that same merchant doing 5 million transactions per year has an average order value of $125 and blocked 30% of all transactions when only 13% were fraudulent, they’re now losing more than $100 million in annual revenue. That’s what makes CNP fraud such a challenging problem to deal with – you have to strike the perfect balance between fighting fraud while maximizing approvals of legitimate transactions.”

Operating systems with the highest percentage of fraudulent transactions

There are five operating systems that make up the majority of eCommerce orders – Android, iOS, Linux, macOS, and Windows. To gain a better understanding of how operating systems impact CNP fraud, Vesta analyzed the percentage of fraudulent transactions made on each as well as the average value of those transactions. 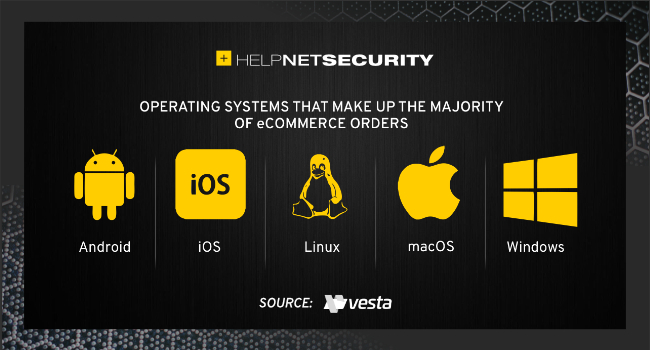 Another critical element of the report is an analysis of CNP fraud with direct linkage compared to indirect linkage. Direct linkage means there’s some common connection within the transactions that merchants can look for as signs of potential fraud – for example, if five orders come in at the same time, for the same item, and from the same email address, that’s a clear sign the transactions could be fraudulent.

Indirect linkage means transactions are linked through a more complex web of elements, often a sign of more sophisticated fraudsters attempting to cover their tracks, which makes it very difficult for merchants to spot.

“Unfortunately, we’re seeing fraudulent transactions with indirect linkage increasing across the board, and the average value of those transactions is higher than those with direct linkage, making it an even more expensive and complicated problem for merchants to navigate,” said Hynes.

“The only way to effectively identify and prevent CNP fraud with indirect linkage is with machine learning, and it’s critical to use models that have been trained against millions of global transactions and can therefore draw connections that humans simply can’t see.”