87% of network managers, network architects and network engineers say their organizations have increased their investment in NetOps over the past two years, with just 5% saying they have decreased it. 48% of organizations reveal they have increased spending by around 50% or more. That’s according to a survey commissioned by Opengear, which polled respondents across the U.K., U.S., France and Germany. 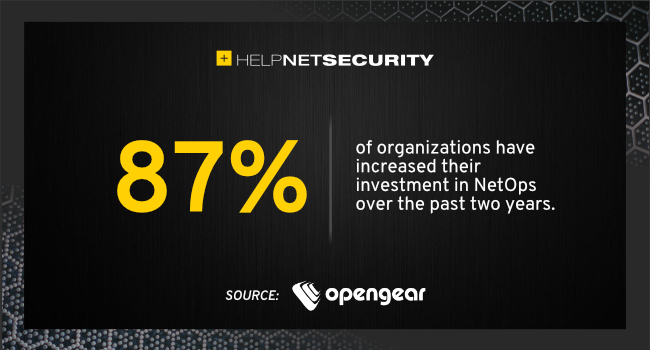 NetOps, which stands for network operations and in its current iteration, NetOps 2.0, embeds a growing amount of automation, virtualization and orchestration to make networking operations faster and more accessible, has rapidly established itself as fundamental to network management today.

97% of the respondents to the survey either regarded it as ‘somewhat important’ or ‘very important’ to network infrastructure planning across their organization.

Underlining the importance of the network to the whole business, the biggest driver of NetOps and network automation, identified by respondents to the survey, was ‘digital transformation’ (23%). Other major drivers identified included: ‘a need to achieve performance improvements’ (17%); ‘a growing focus on the importance of business continuity’ and ‘cost savings’ (both 16%).

Given this, it is unsurprising that when provided with a list of factors related to network management and asked which of the following they were most focused on implementing over the next 12 months, the survey sample ranked ‘NetOps functionality’ (54%) and network automation (28%) top of the list.

Gary Marks, president of Opengear, said: “With engineers unable to visit sites and network teams confined to their homes, the pandemic has clearly played a part in the drive to invest in NetOps. However, the manifest benefits of the approach around driving agility, improving performance and saving costs are such that it has built a market momentum of its own. We expect to see spending on NetOps and network automation solutions continue to ramp up in the years to come.”