Global wireless 5G connections have reached 438 million by the third quarter of 2021 and are on pace to exceed 540 million by the end of the year, according to data from Omdia, said 5G Americas. 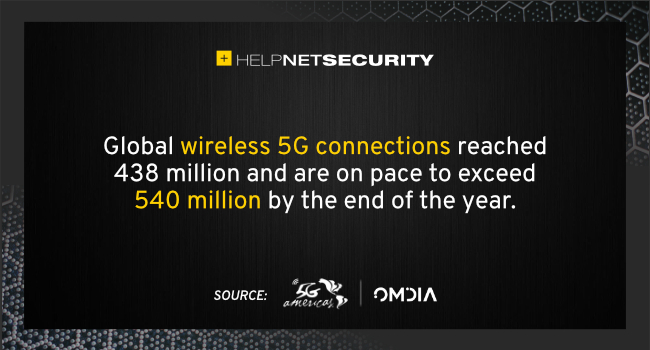 Chris Pearson, President of 5G Americas said, “Despite challenging times with the COVID-19 pandemic issues, 5G uptake continues at a fast pace as communications and connectivity have taken center stage.”

According to the most recent data from Omdia, the world added 72 million 5G connections between Q2 and Q3 of 2021, increasing 19.6% from 366 million to 438 million, reflecting a downward re-statement of connections from Q2. At this pace of growth, 5G is expected to more than double the number of connections in 2020 and is forecast to reach 540 million globally by the end of the calendar year.

Looking forward, Omdia estimates global 5G connections reaching 4.8 billion by the end of 2026. Of that, 516 million is expected to come from North America and 301 million from Latin America and the Caribbean.

Omdia principal analyst Kristin Paulin said, “While Oceania Eastern & South-Eastern Asia, which includes China, will account for more than half of all 5G subscriptions at the end of 2026, the Americas region will manage to carve out a 17% portion after growing 1,000% from 2021 to 2026.”

Overall, the number of 5G commercial networks has reached 185, according to data from TeleGeography and 5G Americas. That number is expected to reach 220 by the end of 2021 and 329 by the end of 2023, representing strong 5G network investment growth in many regions throughout the world. The number of 5G and 4G LTE network deployments are summarized below: