In a global consumer survey, Axway finds that almost 60% of people believe it’s worth allowing companies to access their personal data if it means a better user experience. 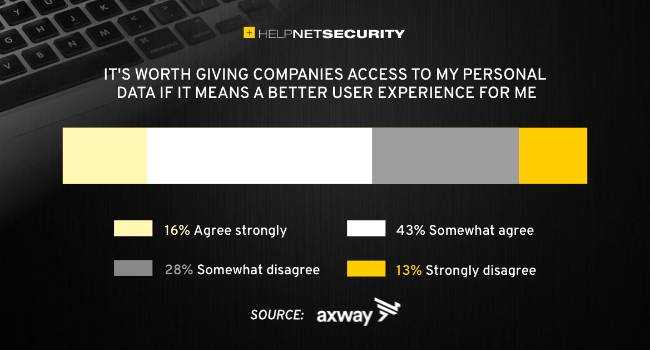 The survey also shows regional – and perhaps cultural – differences in consumers’ embrace of data openness: 75% of Brazilians and 59% of U.S. Americans said it is worth giving companies access to their personal data if it means a better user experience, whereas the British are actually quite split – only 50% agreeing it’s worth giving access to their data – and Germans are slightly opposed to the notion, with only 48% agreeing.

“This survey tells us there’s a clear appetite for ‘Open Everything,’” said Vince Padua, Axway’s Chief Technology & Innovation Officer. “It indicates there is an expectation for satisfying digital experiences. Securely opening up data while building on heritage infrastructure can help craft these experiences – while allowing companies to give us the privacy and security we crave,” added Padua.

Even when the average consumer doesn’t necessarily grasp the technology underpinning it, principles of data openness seem to resonate with respondents. For example, 76% of people agree their health providers should have the same, most up-to-date information about a patient to help decrease miscommunication and human errors and provide better care.

“People want what APIs in healthcare can offer: better access to and ownership of their health records,” said Padua. “Ultimately, open healthcare has the potential to help patients make better, more informed decisions about their health needs.”

The expansion of open banking

Meanwhile, 84% of respondents globally agree that they should have control of their financial data, and banks should not prevent the movement of money between other financial services – principles that are basic tenets of open banking.

Brazilians are most wholeheartedly embracing open banking, with 79% of them saying they view a growing movement toward open banking as a positive development.

“We’re seeing such enthusiasm in dynamic markets like Latin America, the Middle East, and Africa. People there have really grasped the potential of open banking to democratize finance – and companies are moving quickly to seize a great business opportunity,” said Axway Head of Open Banking Eyal Sivan.

Further north, U.S. Americans are more split, with only slightly more feeling it’s a positive development (51%) and the rest worried about security and data privacy.

Meanwhile, in a region that was an early adopter of open banking regulations surrounding data ownership, Europeans tend to have more negative responses to the growing open banking movement: 60% of French respondents see open banking as a negative development, followed by 57% of Germans and 54% of British. They echo U.S. Americans’ concerns about security and data privacy.

The results highlight a growing awareness of – and desire for – more personalized, convenient services, but with an important caveat: security and privacy. 85% of global respondents say they’re concerned their online data may not be secure.