Radware released report findings which underscore 2021 as the year of the web application attack. Between 2020 and 2021, the number of malicious web application requests climbed 88%, more than double the year-over-year growth rate in distributed denial-of-service (DDoS) attacks, which were up 37% over 2020. 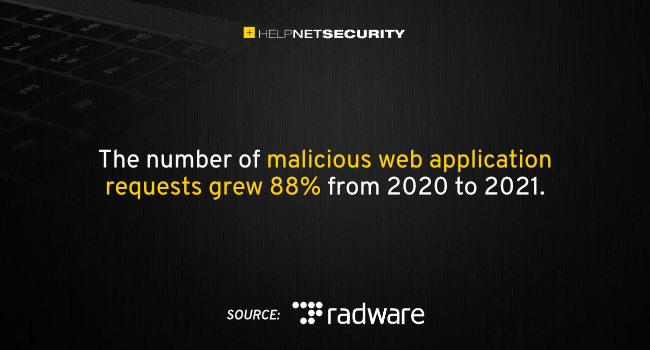 The unprecedented increase in web application attacks did not, however, prevent DDoS from making a name for itself in 2021. The report details how last year saw multiple record-breaking DDoS attacks and ransom denial-of-service (RDoS) earn its place in the threat landscape. At the same time that big attacks were making headlines, the volume of micro floods, attacks which often go undetected, rose nearly 80% compared to 2020.

“The statistics tell a story about bad actors. They are getting smarter, more organized, and more targeted in pursuing their objectives — whether that be for money, fame, or a political cause,” said Pascal Geenens, director of threat intelligence for Radware.

“In addition, cybercriminals are shifting their attack patterns — from leveraging larger attack vectors to combining multiple vectors in more complex-to-mitigate campaigns. Ransomware operators and their affiliates, which now include DDoS-for-hire actors, are working with a whole new level of professionalism and discipline — something that we have not seen before.”

The report reviews the most important cybersecurity events in 2021 and provides detailed insights into DDoS and web application attack developments as well as unsolicited network scanning trends.

In 2021, the number of malicious DDoS events increased by 37% per customer compared to 2020. Europe, the Middle East, and Africa (EMEA) and the Americas each accounted for 40% of the attack volume in 2021, while the Asia Pacific region accounted for 20%.

The top attacked industries in 2021 were gaming and retail, each accounting for 22% of the attack volume on a normalized basis. These two industries were followed by the government (13%), healthcare (12%), technology (9%), and finance (6%).

The most attacked industries in 2021 were banking and finance, along with SaaS providers, together accounting for more than 28% of web application attacks. Retail and high-tech industries ranked third and fourth, each with almost 12% of the web security events, followed by manufacturing (9%), government (6%), carriers (6%), and transportation (5%).