During the second half of 2021, cybercriminals launched approximately 4.4 million Distributed Denial of Service (DDoS) attacks, bringing the total number of DDoS attacks in 2021 to 9.75 million, a NETSCOUT report reveals. These attacks represent a 3% decrease from the record number set during the height of the pandemic but continue at a pace that’s 14% above pre-pandemic levels. 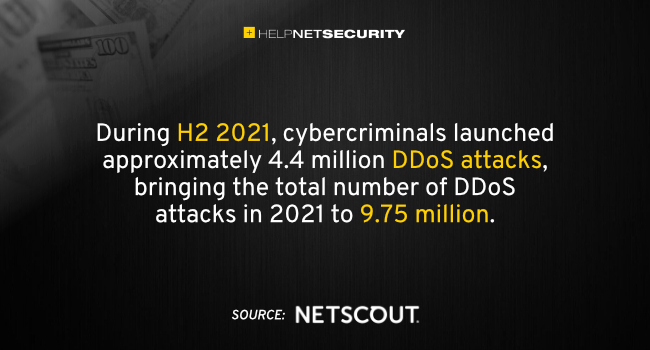 The report details how the second half of 2021 established high-powered botnet armies and rebalanced the scales between volumetric and direct-path (non-spoofed) attacks, creating more sophisticated operating procedures for attackers and adding new tactics, techniques, and methods to their arsenals.

“While it may be tempting to look at the decrease in overall attacks as threat actors scaling back their efforts, we saw significantly higher activity compared to pre-pandemic levels,” said Richard Hummel, threat intelligence lead, NETSCOUT.

“The reality is that attackers are constantly innovating and adapting new techniques, including the use of server-class botnets, DDoS-for-Hire services, and increased used direct-path attacks that continually perpetuate the advancement of the threat landscape.”

APAC attacks increased by 7% as other regions subsided. Amid ongoing geopolitical tensions in China, Hong Kong, and Taiwan, the Asia-Pacific region saw the most significant increase in attacks year over year compared to other regions.

Server-class botnet armies arrived. Cybercriminals have not only increased the number of Internet-of-Things (IoT) botnets but have also conscripted high-powered servers and high-capacity network devices, as seen with the GitMirai, Meris, and Dvinis botnets.

Direct-path attacks are gaining in popularity. Adversaries inundated organizations with TCP- and UDP-based floods, otherwise known as direct-path or non-spoofed attacks. Meanwhile, a decrease in some amplification attacks drove down the number of total attacks.