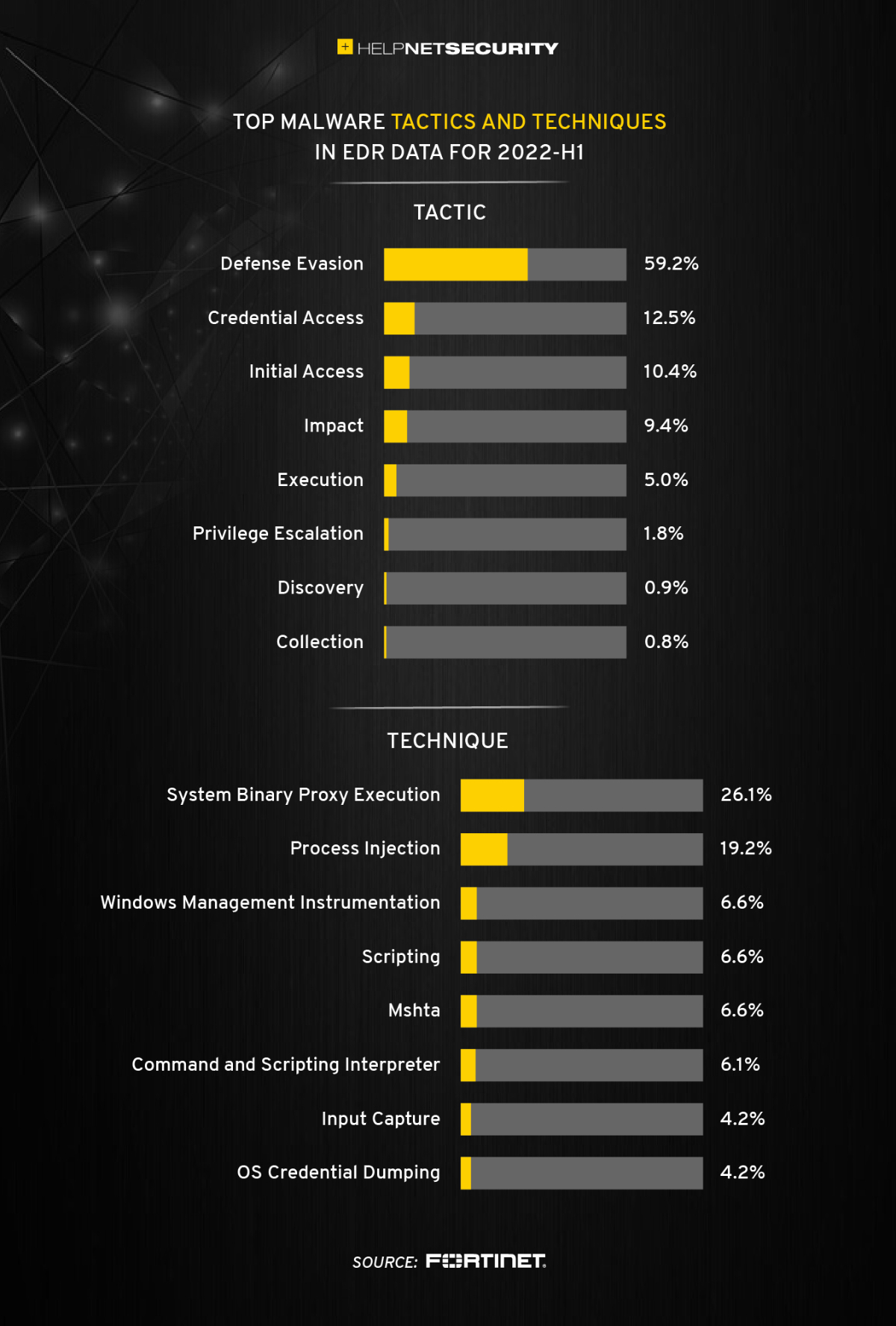 Additional highlights of the report:

Ransomware remains a top threat and cyber adversaries continue to invest significant resources into new attack techniques and variants. In the past six months, FortiGuard Labs has seen a total of 10,666 ransomware variants, compared to just 5,400 in the previous six-month period. That is nearly 100% growth in ransomware variants in half a year. RaaS, with its popularity on the dark web, continues to fuel an industry of criminals forcing organizations to consider ransomware settlements.

To protect against ransomware, organizations, regardless of industry or size, need a proactive approach. Real-time visibility, protection, and remediation coupled with zero-trust network access (ZTNA) and advanced endpoint detection and response (EDR) are critical.

The digital convergence of IT and OT and the endpoints enabling WFA remain key vectors of attack as adversaries continue to target the growing attack surface. Many exploits of vulnerabilities at the endpoint involve unauthorized users gaining access to a system with a goal of lateral movement to get deeper into corporate networks. For example, a spoofing vulnerability (CVE 2022-26925) placed high in volume, as well as a remote code execution (RCE) vulnerability (CVE 2022-26937). Also, analyzing endpoint vulnerabilities by volume and detections reveals the relentless path of cyber adversaries attempting to gain access by maximizing both old and new vulnerabilities.

In addition, when looking specifically at OT vulnerability trends, the sector was not spared. A wide range of devices and platforms experienced in-the-wild exploits, demonstrating the cybersecurity reality of increased IT and OT convergence and the disruptive goals of adversaries.

Advanced endpoint technology can help mitigate and effectively remediate infected devices at an early stage of an attack. In addition, services such as a digital risk protection service (DRPS) can be used to do external surface threat assessments, find and remediate security issues, and help gain contextual insights on current and imminent threats.

FortiGuard Labs identified at least seven major new wiper variants in the first six months of 2022 that were used in various campaigns against government, military, and private organizations. This number is significant because it is close to the number of wiper variants that have been publicly detected since 2012.

Additionally, the wipers did not stay in one geographical location but were detected in 24 countries besides Ukraine. To minimize the impact of wiper attacks, network detection and response (NDR) with self-learning artificial intelligence (AI) is helpful to better detect intrusions. Also backups must be stored off-site and offline.

Examining adversarial strategies reveals takeaways about how attack techniques and tactics are evolving. FortiGuard Labs analyzed the functionality of detected malware to track the most prevalent approaches over the last six months. Among the top eight tactics and techniques focused on the endpoint, defense evasion was the most employed tactic by malware developers. They are often using system binary proxy execution to do so. Hiding malicious intentions is one of the most important things for adversaries. Therefore, they are attempting to evade defenses by masking them and attempting to hide commands using a legitimate certificate to execute a trusted process and carry out malicious intent.

In addition, the second most popular technique was process injection, where criminals work to inject code into the address space of another process to evade defenses and improve stealth. Organizations will be better positioned to secure against the broad toolkits of adversaries armed with this actionable intelligence. Integrated, AI and ML-driven cybersecurity platforms with advanced detection and response capabilities powered by actionable threat intelligence are important to protect across all edges of hybrid networks.

When organizations gain a deeper understanding of the goals and tactics used by adversaries through actionable threat intelligence, they can better align defenses to adapt and react to quickly changing attack techniques proactively. Threat insights are critical to help prioritize patching strategies to better secure environments.

Cybersecurity awareness and training are also important as the threat landscape changes to keep employees and security teams up-to-date. Organizations need security operations that can function at machine speed to keep up with the volume, sophistication, and speed of today’s cyber threats.

AI and ML-powered prevention, detection, and response strategies based on a cybersecurity mesh architecture allow for much tighter integration, increased automation, as well as a more rapid, coordinated, and effective response to threats across the extended network.