The global introduction of electronic passports is a large coordinated attempt to increase passport security. Issuing countries can use the technology to combat passport forgery and look-alike fraud. While addressing these security problems other security aspects, e.g. privacy, should not be overlooked. This article discusses the theoretical and practical issues, which impact security for both citizens and issuing countries.

The ICAO (International Civil Aviation Organization) has been working on what they call MRTD (Machine Readable Travel Document) technology for quite a while. This technology should help to reduce fraud and support immigration processes. The MRTD specifications became a globally coordinated attempt to standardize advanced technology to deliver strong identification methods. Rather then using common practices from the security industry the MRTD standards aimed at a revolutionary combination of advanced technology, including contactless smartcards (RFID), public key cryptography, and biometrics.

The MRTD specs support storage of a certificate proving authenticity of the document data. The signed data includes all regular passport data, including a bitmap of the holder’s picture. Further data that may be stored in the e-passport include both static and dynamic information:

Electronic Passport security mechanisms
With the aim to reduce passport fraud the MRTD specs primarily addressed methods to prove the authenticity of passport and its data, and the passport holder. The technology used for this includes PKI (Public Key Infrastructure), dynamic data signing and biometrics. The latter (biometrics) however is still under discussion and not yet fully crystallized in the specifications.

Active Authentication
The cloning problem is addressed with an optional signing mechanism called active authentication. This method requires the presence of a asymmetric key-pair and public key cryptographic capabilities in the chip. The public key, signed by the issuing country and verified by passive authentication, can be given to the inspection system, which allows verification of a dynamic challenge signed with the private key. While the private key is well protected by the chip it effectively prevents cloning since the inspection system can establish the authenticity of the passport chip with the active authentication mechanism.

RFID
For the incorporation of modern electronic technology in the existing paper documents it was decided to use (contactless) RFID chips. These chips can be embedded in a page of the document and put no additional requirements on the physical appearance of the passport. A question that arises here is whether this is the only reason to apply RFIDs instead of contact based cards. Other reasons could be related to the form factor of contact smart cards which complicates embedding in a passport booklet, or the fact that contacts may be disturbance sensitive due to travel conditions. With the choice for RFID the privacy issue arises. RFIDs can be accessed from distances up to 30 cm, and the radio waves between a terminal and an RFID can be eavesdropped from a few meters distance. An adversary with dedicated radio equipment can retrieve personal data without the passport owner’s consent. This risk is particularly notable in a hostile world where terrorists want to select victims based upon their nationality, or criminals commit identity theft for a variety of reasons.

Basic Access Control
To protect passport holder privacy the optional Basic Access Control (BAC) mechanism was designed. This mechanism requires an inspection system to use symmetric encryption on the radio interface. The key for this encryption is static and derived from three primary properties of the passport data: 1) date of birth of holder; 2) expiry date of the passport; 3) the passport number. This data is printed in the Machine Readable Zone (MRZ) a bottom strip (see figure Figure 3) of one of the passport pages. In a normal access procedure the MRZ data is read first with an OCR scanner. The inspection system derives the access key from the MRZ data and can then set up an encrypted radio communication channel with the chip to read out all confidential data. Although this procedure can be automated it sets high requirements to inspection systems and also impacts inspection performance. 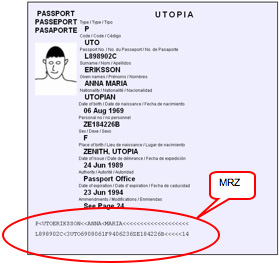 The BAC mechanism does provide some additional privacy protection, but there are two limitations that limit the strength of this mechanism:

The author of this article discovered BAC security issues in July 2005 and showed that the key entropy that could reach 66 bits may drop below 35 bits due to internal data dependencies. When passport numbers are for instance allocated sequentially they have a strong correlation with the expiry date, effectively reducing the key entropy. An eavesdropper would then be able to compute the BAC key in a few hours and decode all confidential data exchanged with an inspection system. The Netherlands, and maybe other countries, have changed their issuance procedures since this report to strengthen the BAC key.

An associated privacy problem comes with the UID (Unique Identification) number emitted by an RFID immediately after startup. This number, if static, allows an easy way of tracking a passport holder. In the context of e-passports it is important that this number is dynamically randomized and that it cannot be used to identify or track the e-passport holder. The reader should note that these privacy issues originate from the decision to use RFID instead of contact card technology. Had this decision been otherwise the privacy debate would have been different as it would be the passport holder who implicitly decides who can read his passport by inserting it into a terminal.

Future generations of the technology will also allow the following options:

In terms of cryptography a variety of algorithms and various key lengths are (or will be) involved:

The problem with all these options is that a passport can select a set of preferred options, but an inspection system should support all of them! An associated problem in the introduction of the passport technology is that testing inspection systems becomes very cumbersome. To be sure that false passports are rejected the full range of options should be verified for invalid (combinations of) values. Finally, a secure implementation of the various cryptographic schemes is not trivial. Only recently a vulnerability was discovered by Daniel Bleichenbacher that appeared to impact several major PKCS-1 implementations. PKCS-1 also happens to be one of the allowed signing schemes for passive authentication in e-passports. This means that inspection systems should accept passports using this scheme. Passport forgery becomes a risk for inspection systems that have this vulnerability. Immigration authorities can defend themselves against this attack, and other hidden weaknesses, by proper evaluation of the inspection terminals to make sure that these weaknesses cannot be exploited.

Biometrics and Extended Access Control
Biometrics
The cornerstone of e-passport security is the scheduled use of biometric passport holder verification. The chip will contain the signed biometric data that could be verified by the inspection system. It is only this feature that would prohibit the look-alike fraud. All other measures do address passport forgery, but the primary concern of look-alike fraud requires a better verification that the person carrying the passport is indeed the person authenticated by the passport. Many countries have started issuance of e-passports, but the use of biometrics is delayed. There are two main reasons:

The impact of first issue is decreasing in the sense that the quality of biometric systems gets better over time, although it may slow down the introduction of biometrics in e-passports. At least at this moment, there is still limited experience of representative pilot projects. The second issue is more fundamental, issuing countries will always consider who to share sensitive data with. To alleviate these concerns the ICAO standardization body has introduced the concept of Extended Access Control.

The current EAC specification foresees a certificate lifetime of several days. The two conditions above will result in an intensive traffic of certificate updates.

A problem acknowledged by the EAC specification is the fact that e-passports have no concept of time. Since the RFID chips are not powered in between sessions, they do not have a reliable source of time. To solve this problem, an e-passport could remember the effective (starting) date of validated certificates, and consider this as the current date. This could potentially lead to denial-of-service problems: if an e-passport accepts an inspection system’s certificate whose effective date has not yet arrived, it may reject a subsequent inspection system certificate that is still valid. To avoid this problem the specification proposes to use only certificates of trusted domestic terminals for date synchronization.

Although date synchronization based on domestic certificate effective dates would give the e-passport a rough indication of the current date this mechanism leaves a risk for some users. Infrequent users of e-passports and users being abroad for a long time will experience that their e-passport date is lagging behind significantly. For example, if an e-passport has validated a domestic EAC capable terminal 6 months ago, it will reveal sensitive data to any rogue terminal stolen over this period.

With respect to EAC and biometrics several practical and standardization issues are yet to be resolved. Although EAC, in its current specification, offers strong benefits over the simpler BAC it is certainly not a panacea, and there is room for improvement. Nevertheless, migration to biometrics in e-passports is needed to effectively combat look-alike fraud.

Conclusion
The global introduction of electronic passports delivered a first generation of e-passports that support digital signatures for document authentication. The system builds on the newest technology, and a high level of expertise is needed for a secure implementation and configuration of both the e-passports and the inspection systems. The technology got increasingly complex with the decision to use contactless RFID technology. Additional security measures were introduced as a result of privacy concerns. But these measures appear to offer limited privacy protection at the cost of procedural and technological complexity.

The next generation e-passports will include biometrics and Extended Access Control (EAC). The standardization of these features is unfinished and could still be improved. Future e-passports, using all security features, will offer strong fraud protection:

This level of security can only be reached if all passports implement these features; otherwise fraudsters can fall back to less advanced or legacy passports. Therefore it is important for ICAO to finalize the EAC standardization, and for issuing countries to continue the migration process and enhance their passports with biometrics.