Between October and December 2008, the United States relayed most of the world’s unwanted emails. China has leapt back into second place, relaying a larger proportion of spam than it did in 2004, and Russia retains third position. In contrast, other nations like Canada, Japan and France – serial offenders five years ago – appear to have made progress and are no longer present in the list of spam reprobates.

Sophos identified the top twelve countries responsible for relaying spam across the globe between October-December 2008: 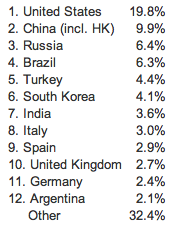 Asia continues to deliver over one third of all spam, and when combined with Europe, the two continents relay almost two thirds of the world’s unwanted emails.