Shortened URLs are not just for Twitter – their small footprint also lends itself beautifully to Instant Messaging.

Unfortunately, even cybercriminals are now privy to the fact and have started using them to spread malware: 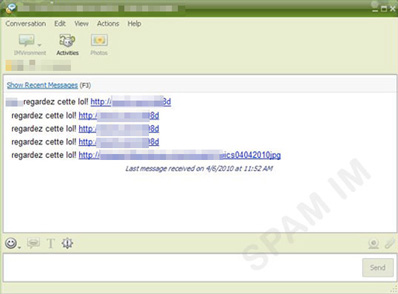 The shortened form of the URL is not only more likely to fool the users into visiting a page that is hosting malware, but also adds to the time it takes antivirus companies to detect it and block it.

TrendLabs warns about messages such as the one above that are carrying shortened links that leads to the download of a worm that is then further spread via physical/removable/floppy drives and P2P networks. It is difficult to spot it immediately because it hides by spoofing names of popular movies and games.