I have been a satisfied Mac user for quite some time now. What I really love about Macs is that they just work. When you spend 10+ hours a day on your computer, you need for everything to run without hiccups, strange crashes and zen situations that test your brain power and patience.

I’ve been using Safari as a primary browser and, until recently, it worked perfectly. In the past six months or so, I’ve been witnessing Safari constantly hanging and crashing. Even on my 2.4 GHz Intel Core 2 Duo iMac with 4 GB of RAM, I’ve seen Safari killing the entire system, making it unresponsive for periods of up to two minutes. Sometimes I had the feeling I was somehow transported back to the Windows Me era.

What was the problem with Safari? Was the quality assurance procedure in this Apple division not up to the usual high standards? My questions were answered by Bertrand Serlet, Apple senior VP of software engineering, who at the WWDC 2009 keynote announced a new way to run plugins in Safari.

From the feedback they got from the Crash Report app, the majority of Mac OS X crashes were caused by plugins.

Which plugins? Officially, he said plugins in general, but unofficially he meant Flash. With the Mac OS X updates that occurred afterwards, the users were finally able to see what was crashing their Safaris.

In my case, with every Safari disaster, I would get the following pop-up:

Flash was a cool piece of technology back in the day where everything on the Internet was static and blend. Flash sites started popping out, but besides the good looks, I never liked the functionality they provided. In the past year or so, Flash has been taking a serious beating. Besides being buggy, there were much serious security implications with an ever-growing list of high profile vulnerabilities identified in this Adobe platform.

A couple of weeks ago, after the seventh crash in just 4 days, I decided to stop Flash from slowing down my everyday online activities. People suggested that I should start using Firefox or Chrome, but I am used to Safari, so the only option was to use ClickToFlash.

ClickToFlash is a free application, currently in version 1.5.5 with beta being in 1.6b9, that will shield your Safari from the pains of Flash. The installation is done with just a couple of clicks and and a browser restart.

The application works silently in Safari and by default blocks all flash files. If you want to view a blocked file you can just click on it and the current flash presentation gets white-listed and you can run it without any setbacks.

In the upper left corner of every flash file, ClickToFlash places a settings icon that gives you the possibility of loading the file or whitelisting the whole domain.

In the settings area, you can do some customization such as flagging YouTube to run the H.266 videos by default. 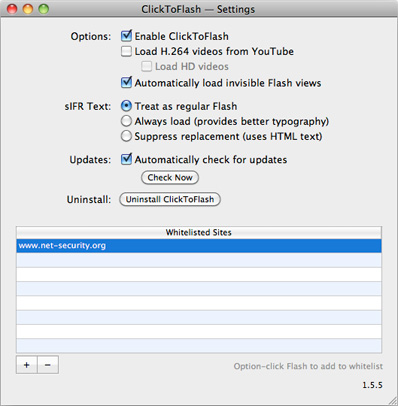 Overall the application works flawlessly and since installing it my Safari didn’t crash once.