A link that will supposedly take users to a page where they can use a “mobile” version of Twitter has been popping up here and there in a number of chatrooms over the weekend.

Sunbelt‘s Chris Boyd did a quick search on Twitter, and found out that the URL had been used before – as far back as a year ago – and was propagated by an account that seemingly targeted Twitter users with lots of followers, such as singers and football players: 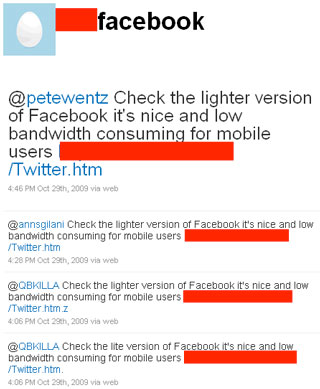 At the time, the lure was a “lighter version of Facebook”, but luckily it seems that nobody took the bait. Just imagine what an audience would the scammers had if they succeeded in compromising one of those million-followers accounts-Â¦