BoingBoing.net, the popular blog and “directory of wonderful things”, has been hacked and its home page replaced with a message containing vulgar language and pictures: 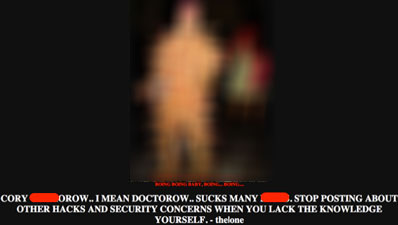 The site was pulled down by the administrators shortly after the attack, which is suspected to have been executed via an SQL injection, TechCrunch reports.

The site is now available again, and the people at BoingBoing seem to have kept their sense of humor about the situation – the site’s Twitter feed includes posts such as: “So much for the 100,000 Hours Without a Hack T-shirts” and “BoingBoing’s latest redesign a failure, Web experts say”. They also say that the site’s commenting system “will be on hold for a while longer” due to the attack.

What was the thing that sparked the attack, nobody knows – or is telling – right now. I must admit that when I first heard about it and didn’t know any details, I thought that maybe a post from two days ago about organized cybercrime and its real-life consequences triggered it.