Trusteer conducted research into the attack potency and time-to-infection of email phishing attacks. One of their findings was that 50 per cent of phishing victims’ credentials are harvested by cyber criminals within the first 60 minutes of phishing emails being received. 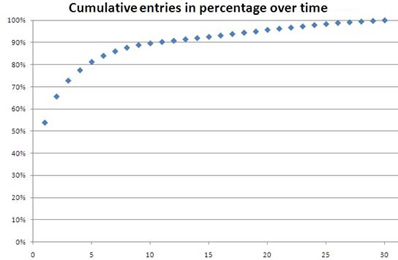 Given that a typical phishing campaign takes at least one hour to be identified by IT security vendors, which doesn’t include the time required to take down the phishing Web site, they’ve dubbed the first 60 minutes of a phishing site’s existence is the critical “golden hour’.

The fact that so many Internet users visit a phishing website within such a short period of time means that blocking a phishing Web site – which is sometimes a cracked legitimate site – within this golden hour has become absolutely critical.

During the golden hour, the research suggests that:

Therefore, blocking a phishing site after 5-10 hours is almost irrelevant.

A more effective model would prevent users from being directed to a phishing site and/or prevent them from entering their credentials if they do end up on a criminal site.

“As an industry, our goal should be to reduce the time it takes for institutions to detect they are being targeted by a phishing attack from hours to within minutes of the first customer attempting to access a rogue phishing page. We also need to establish really quick feeds into browsers and other security tools, so that phishing filters can be updated much more quickly than they are today. This is the only way to swiftly takedown phishing websites, protect customers, and eliminate the golden hour,” said Amit Klein, Trusteer’s CTO.