“Tis the season to be jolly – and to leave sensitive corporate information behind at the airport! According to telephone interviews with the lost property offices of 15 UK airports, including Heathrow and Luton, over 5,100 mobile phones and 3,844 laptops have been left behind so far this year; with the majority still unclaimed and many more expected to be left over the Christmas holiday peak season. 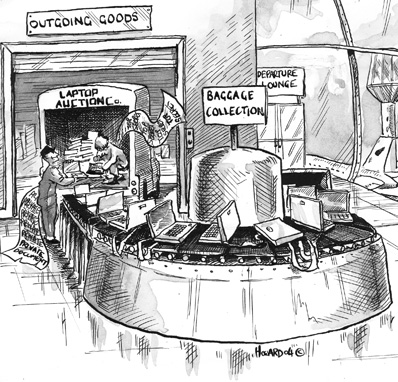 This figure is likely to be just the tip of the iceberg as ABTA expect over 4m people to be traveling over this period, and the overall figures do not take into account all those devices that were stolen, or kept by the “lucky’ finder.

The survey, carried out by Credant Technologies, also found that in the majority of cases, those devices that aren’t reclaimed are then either sold at auction or donated to charities. However the fact is that these devices may still contain information that could be available for the new owner!

With ID theft from mobile phones and other lost devices at an all time high, users should really take special care this Christmas when traveling.

According to a representative at Luton Airport, the most common place devices are forgotten is at the security check point as it’s a very pressured environment with numerous distractions. Often, once the travelers have boarded the plane and left the country it’s just too expensive to return for the device, which in most instances will be covered by insurance, resulting in the majority going unclaimed.

1. As you leave – whether it’s the check-in desk, security check point, or even the train station, make sure you take everything with you, including your mobile devices. A few seconds to check could potentially save you hours of frustration and embarrassment.

2. Protect your mobile device: with at least a password (and ensure that it is a strong one, containing letters, numbers and symbols). Better still, use an encryption solution so that even if your device is left behind, the data on it is not accessible to anyone who finds it.

3. Don’t elect to automatically complete online credentials, such as corporate network log in details, so that if you and your device should become separated, it cannot operate without you.

4. Back-up your device and remove any sensitive information that you do not need. If it’s not there it can’t be breached.

5. As in tip 4, remove SMS and emails that you don’t need anymore – you’d be sur prised how many people keep their default password emails on their mobiles and other hugely sensitive information like PINs, bank account details or pass words!

7. Include your name and contact details in the device so that, if it should be lost, it can easily be returned to you. Some operators have a registration service to facilitate this.

8. Finally, speak to your IT department before you leave the office this year – that’s what they’re there for. They’ll help make sure your device is better protected should it find itself languishing all alone at the airport.