On a typical month, exploit activity falls between 30 percent and 40 percent, according to Fortinet. Half of new vulnerabilities rated as “critical” were targeted in January, opening doorways for an attacker to execute any command(s) on a target machine. 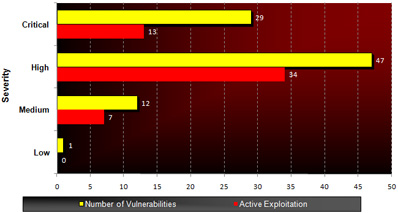 “It is no secret that software vulnerabilities continue to be disclosed in large numbers on an ongoing basis – especially critically rated ones,” said Derek Manky, senior security strategist at Fortinet’s FortiGuard Labs.

“Hackers are sinking their teeth into unprotected systems, thanks to readily available exploit code and attack frameworks that support these new vulnerabilities. Since they are freshly disclosed, not everyone may have up-to-date signatures or proper patches in place. It is imperative to ensure both are updated in a timely fashion in order to effectively combat this threat. Also, with the use of communication through common protocols, application control is becoming more important in identifying malicious activity on the application level.” 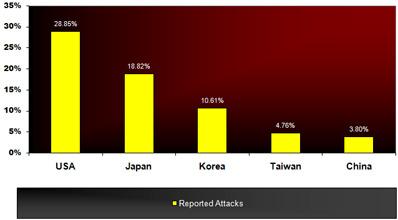 The Feebs, Buzus and Virut Trojans remained persistent and active this month. Feebs is a mass mailer that uses Javascript to infect systems. The “mal”-mail typically contains a password protected archive, along with the information in the mail body.

Buzus, on the other hand, was more prevalent in the spam scene, sending infected attachments of itself using a variety of spam campaigns.

Two Virut variants surfaced during this report period and, as of this writing, they are still receiving commands from Virut controllers to download and execute malware.

Virut.U uses an updated IRC channel and encrypts all traffic to this IRC channel, while Virut.A continues to connect to the IRC server “proxim.ircgalaxy.pl” unencrypted. Both variants are using port 65520 for connection.

Virut, which has been around since 2006 and has been in Fortinet’s Top 10 and Top 100 lists ever since, is a rigid file infector that contains a bot component, making it very difficult to clean since it spreads to thousands of files on a system once it hits.

FortiGuard Labs observed Virut downloading other botnets, meaning an infected system would soon have multiple pieces of malware in place. Virut is one of the most persistent botnets the lab sees today, since it is tough to remove from an infected system, uses a public IRC domain and has hybrid spreading capabilities.