Malware sent via email increased by 400% in the last week of March 2011, Commtouch reported today. The significant increase was detected two weeks after the takedown of the Rustock botnet had resulted in a 30% drop in spam levels. 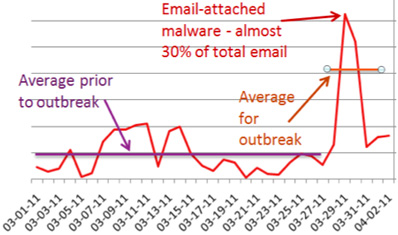 While overall spam activity dropped around the New Year, it rose significantly after the holiday period. From January to mid-March, spam averaged 168 billion emails per day until Rustock was eliminated, dropping spam to an average of nearly 119 billion messages daily. 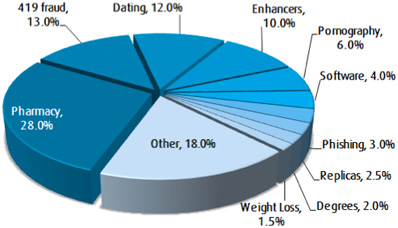 Zombie activity also dropped significantly after Rustock was taken down, but large increases of enslaved computers became evident following the malware outbreak at the end of the quarter.

The first three months of 2011 were witness to a range of varied attempts to distribute malware:

Additional highlights from the April 2011 Trend Report include:

The report also describes attempts by spammers and phishers to save money by hiding their online presence in disused forums or making use of online form-filling services to ease the collection of phished user data.