The malicious use of subdomain services by phishers nearly doubled in the second half of 2010, with phishing gangs using these services about as often as they register domain names, according to the Anti-Phishing Working Group (APWG). 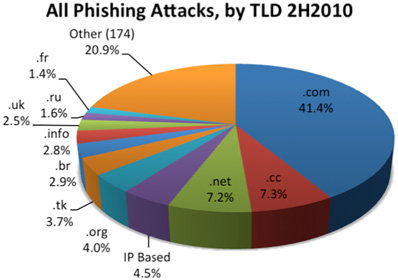 Subdomain registration services give customers subdomain “hosting accounts” beneath a domain name the provider owns. These services are sold, managed, and regulated differently from regular domain names. There were 11,768 phishing websites hosted on subdomain services in the second half of 2010, up 42 percent from the first half of 2010, accounting for the majority of phishing in some Top Level Domains (TLDs).

The increase during the half was notable, as this number had generally remained stable since the second half of 2008.

The 2H2010 total is slightly less than the 12,971 phish found on maliciously registered domain names purchased by phishers at regular domain name registrars in 2H2010. If included in the total of conventionally established domain names, abusive subdomain names would comprise some 22 percent of all domains deployed for phishing attacks. 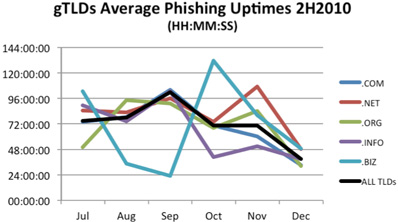 Over 40 percent of attacks using subdomain services occurred on CO.CC, based in Korea, despite the fact that CO.CC is generally responsive to abuse reports. Phishers are probably attracted to CO.CC because CO.CC registrations are free, easy to sign up for, come with DNS service, and there are features to assist with bulk signups. As of this the publication of the report, CO.CC supports more than 9,400,000 subdomains in more than 5,000,000 user accounts.

The report also reveals that two free services were heavily abused by phishers in order to create phishing sites: the .TK domain registration service and the CO.CC subdomain service. Nearly 11 percent of all phishing attacks utilized these relatively little-known services.

Other findings in the report include: