IT departments are now turning to virtualization, with half of the respondents having either implemented or are planning to deploy private clouds, according to a McAfee study.

Yet, as organizations continue to progress down the path of implementing virtualization and cloud computing, they are facing inherent challenges that arise when applications are decoupled from the physical resources they rely on, introducing new obstacles such as traffic bottlenecks, inconsistent network policies and security loopholes. 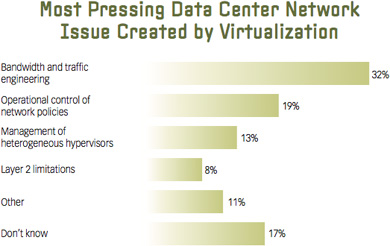 The results show that virtualization comes at a cost and that traditional networking architectures are not always best-suited to handle the demands of a virtualized environment. Application security can fail when subjected to data center-wide server virtualization and application mobility.

Twenty-six percent view targeted attacks as their biggest concerns and 24 percent think security breaches are their biggest concerns. However, although half are relying on the same security model for virtualization they used with physical servers, 18 percent have not decided this is the best approach when securing virtual servers.

In the survey, 40 percent of respondents said that moving virtual machines is challenging because it introduces operational complexity and 25 percent indicated a concern with securing trust boundaries.

The complete survey is available here.