Virus and malware activity increased during the month of May, sporadically hitting peaks of more than 10 million pieces per day, according to AppRiver. 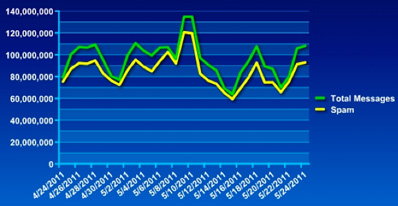 Major news events, once again, became fodder for malware campaigns while large companies continued to be the target of attackers. Here are a few of the other highlights from the month of May:

The chart below represents the top countries from which spam originated during May. For the second consecutive month, Russia held the top spot as the number one country for spam origination. Also, Brazil’s output surpassed the US for the first time in many months.

May brought us a new malware kit that is now being offered online in the underground forums, according to AppRiver’s latest Threat and Spamscape report. It goes by the name of Weylan-Yutani Bot which was taken from the fictional company from the movie Aliens. Weyalnd-Yu has a very interesting feature built in, and that is the ability to automatically create scripts designed to infect both PC and Mac machines.

Mac malware has been around for a while, though it has yet until now been available as a kit. Kits are written so that you can just add a couple of customizations, hit “Go” and it will create custom malware for even the minimally technical. The kit is selling for 1000 credits WebMoney which exchanges to about $1065 US, and the authors have guaranteed the addition of iPad and Linux scripts in the very near future.

Imagine when a user can browse past an infected site and become a victim regardless of their operating system. To best avoid these situations, internet goers should keep all of their software up to date, especially their OS as well as their browsers as these are often the first targets.

Don’t discount the rest of your software, this needs to be handled appropriately too. Including the removal of unnecessary software, and the use of multiple layers of security including antivirus and a firewall. Safe browsing habits don’t hurt either.