Bitcoin has received lately a lot of attention from users and from the media, so it’s no wonder that cyber criminals have also figured out ways to take advantage of its popularity.

Some two weeks ago, a Trojan that goes after users’ wallet.dat file where their bitcoins are stored was spotted.

But now a new one has appeared, and its developer obviously thinks harnessing the power of the victims’ computer to create bitcoins is a better option.

“This Trojan has two components – the legitimate bcm.exe file BitCoin Miner (not-a-virus:RiskTool.Win32.BitCoinMiner.a), and a malicious module that installs bcm without the user’s knowledge and adds it to the autorun registry,” explains a Kaspersky Lab expert. “The infected computer then starts to generate bitcoins for the Trojan’s author.”

Unfortunately for him, his choice proved unsuccessful. Following the hardcoded address in the Trojan’s code, the researcher has managed to track down the mining pool account to which the generated bitcoins are supposed to be funneled. 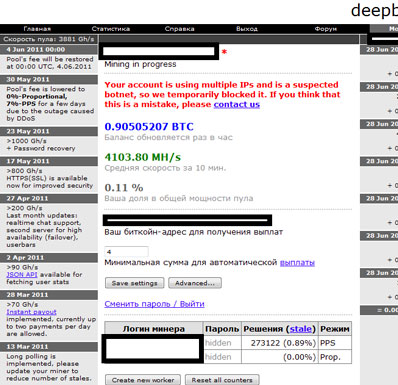 All in all, the criminal hasn’t managed to generate a single bitcoin before it was blocked. I wonder if he will try this approach again.