AirPatrol unveiled ZoneDefense, a new mobile monitoring and policy enforcement technology that lets enterprises support the use of consumer and mobile devices on premises while also ensuring that end users are adhering to company security policies. 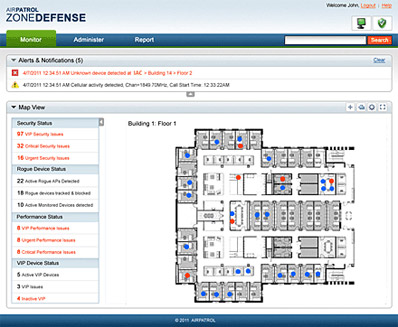 ZoneDefense can detect any mobile device in an enterprise, track its location, check its compliance with company policy and enforce rules based on where the user is located and who is nearby.

Dennis Pollutro, CEO of AirPatrol said: “There is a prevalent security threat as many personal devices are brought into the work environment. However, it is important to understand that we do not only protect corporate assets but also focus on the empowerment of the employee using these devices and their capabilities based on both location and context.”

Under ZoneDefense, any mobile device that is detected – whether it is a managed device or an unknown device – can follow specifically-defined policies based on where it is located and who is nearby. For example, a mobile device that is allowed to do file sharing in an approved area of the headquarters building might have file sharing turned off in another part of the facility.

Enterprises also can set up the system to trigger an alert when an unknown device enters a secure zone such as a boardroom, trading floor or SCIF.

Utilizing commercial wireless bands and Wi-Fi, ZoneDefense’s carrier-agnostic abilities are able to track a device within a couple of meters of its exact location. Platforms supported currently include the iOS and BlackBerry but will expand to the Android operating system later this year.

“ZoneDefense revolutionizes the way we monitor and manage the very fluid and ubiquitous mobile device layer through intelligence,” stated Tom Kellermann, CTO of AirPatrol. “Through continuous wireless monitoring and situational awareness, AirPatrol’s ZoneDefense has an advance persistent response that is paramount in today’s wireless security.”