The amount of malware targeted at Android devices jumped 76 percent since last quarter, to become the most attacked mobile operating system, according to McAfee. 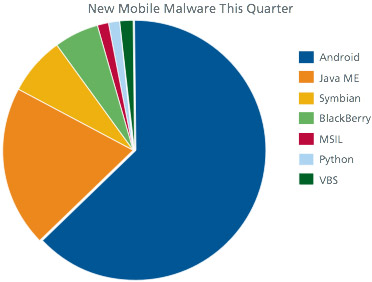 2011 has also resulted in the busiest ever first half-year in malware history, including a first-ever appearance of Mac fake AV and a significant uptick in rootkits, suggesting that McAfee’s comprehensive malware “zoo” collection will reach a record 75 million samples by the year’s end.

“This year we’ve seen record breaking numbers of malware, especially on mobile devices, where the uptick is in direct correlation to popularity,” said Vincent Weafer, senior VP of McAfee Labs. “Overall attacks are becoming more stealth and more sophisticated, suggesting that we could see attacks that remain unnoticed for longer periods of time. High-profile hacktivist groups have also changed the landscape by drawing a line between attacks for personal gain and attacks meant to send a message.”

With an approximate 12 million unique samples for the first half of 2011, a 22 percent increase over 2010, this has been the busiest first half-year in malware history. With the addition of Q2’s numbers, the grand total of total malware samples in McAfee’s database has reached approximately 65 million, and McAfee researchers estimate that this “Malware Zoo” will reach at least 75 million samples by the year’s end.

In the second quarter of 2011, Android OS-based malware surpassed Symbian OS for the most popular target for mobile malware developers.

While Symbian OS and Java ME remain the most targeted to date, the rapid rise in Android malware in Q2 indicates that the platform could become an increasing target for cybercriminals – affecting everything from calendar apps, to comedy apps to SMS messages to a fake Angry Birds updates.

There are more Mac users than ever before, and as organizations increasingly adopt Macs for business use, Apple now has become more a target for malware authors. Though historically the Apple platform has been unaffected by fake anti-virus (fake AV) software, activity in Q2 indicates that it is now being affected. Although this type of fake AV is the first of its kind, McAfee Labs does expect fake AV in general will drop off over time.

Another malware category that is demonstrating recent steady growth is stealth malware. The tactic of hiding malware in a rootkit is used by cybercrminals to make malware stealthier and more persistent, and has seen this type of attack gain in prominence over the past year, with high-profile attacks such as Stuxnet. Stealth malware has increased more rapidly in the last six months than in any previous period, up almost 38 percent over 2010.

Acts of hacktivism, primarily from the groups Anonymous and LulzSec, were among some of the most prominent cyber news generators for Q2. The report details hacktivist activity from Q2, with at least 20 global attacks reported in Q2 alone, and with the majority allegedly at the hands of LulzSec.

The report also outlines acts of cyberwar that occurred in Q2, including attacks on United States’ Oak Ridge National Laboratory, and an attack on South Korea’s National Agricultural Cooperative Federation.

Though spam is still at historic low levels, due in part to the Rustock takedown, McAfee Labs still expects to see a sharp rise in activity over the coming months. A common method for cybercriminals to increase their volume of spam activity is to purchase a bulk list of emails in order to flood as much spam as possible to a widespread group of people. Whether it’s a botnet or a rental service, prices vary for such enterprises, often by location. For instance, in the United States, the going rate for 1 million emails is $25, whereas in England 1.5 million emails are worth $100.