Firefox is the second most widely used browser in the world, so we can be sure that malicious individuals are already working on ways to take advantage of yesterday’s release of its latest incarnation.

An possible example has already shown up. Sophos’ Graham Cluley has decided to search for “Firefox 7” on Google and among the first few offered results is a page hosted on the firefox7.org domain: 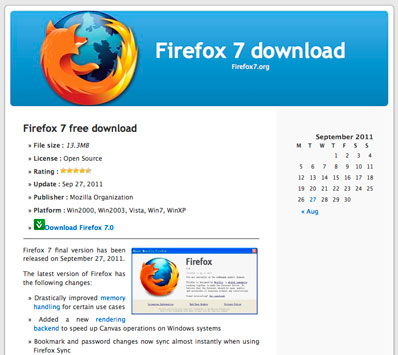 The information on the page has been copied from the official Firefox page, and the download link takes to user to a Blogspot page with half a dozen links that (supposedly) link to the software.

A click on any of these links takes the user on yet another page, where he is finally offered a direct link to the software – hosted on the official Firefox site.

In this particular case, the page owner (ostensibly one Xiaojuan Zhang from the Chinese Guandong province) doesn’t try to trick users into downloading malware. Cluley speculates that he is trying to earn some money by taking advantage of the public’s interest in Firefox 7.

“Some of his webpages contain Google Adwords, which presumably he is hoping will earn him some revenue – especially considering how high his site is appearing in Google Search results at the moment,” he says, but points out that even though the site is currently not malicious in nature, the final links can be changed to point to malware at any given time.

In short, when it comes to downloading legitimate software, the safest thing users can do is to download it from the official site and be aware that search results for popular terms are often littered with malicious sites.