A week after the official Sesame Street YouTube channel got compromised and started offering adult content to children, Microsoft’s official YouTube channel has been hacked by an unknown individual who removed all the videos and changed the accompanying text to say: “Wish to Become Sponsored? Message me.” 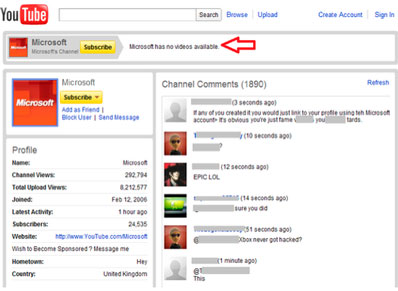 According to The Hacker News, in the short time that the channel was compromised, the perpetrator uploaded four short clips/advertisements and offered insight into how he managed to hijack the channel. Apparently, he created this particular account in 2006, likely before Microsoft has event thought about it and before the company asked YouTube to delete the account so that it may register it.

It is possible that his password still worked or that he managed to restore it because his email address is still tied to the account in some way. It is also possible that a Microsoft employee in charge of updating the channel got phished.

The channel is now back in Microsoft’s hands and is up and running again.