Oracle Solaris 11 is designed to meet the security, performance and scalability requirements of cloud-based deployments allowing customers to run their most demanding enterprise applications in private, hybrid, or public clouds. 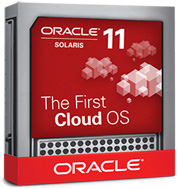 “Secure by default” features include start up, role-based root access and low impact auditing for both cloud and traditional datacenter deployments.