Emails purporting to come from Apple and urging users to update the billing information contained in their Apple accounts are currently hitting inboxes around the world, warns Sophos.

With a spoofed sender email address that looks like it might belong to Apple and a clean, minimalistic “Apple” look, the email will definitely fool some people.

For those who are more perceptive and careful, the threat of account termination and the inappropriate use of capital letters will be enough to raise some suspicions, which will end up being confirmed if they hover with the mouse over the offered link: 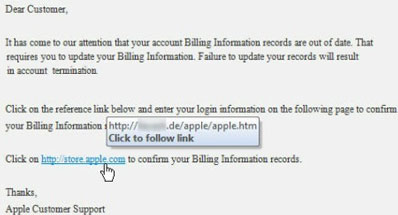 The real destination of the link is a phishing page hosted on a German domain, which has already been suspended, but the phishers have likely already changed the link in more recent versions of the email.