Survey scammers love targeting Facebook users, because the social nature of the network makes sure that the scam will be propagated far and wide.

The latest of these scams has been hitting the Walls of compromised accounts with posts containing a thumbnail suggesting a link to a sex video, accompanied with the following message: “[Video] WOW.. watch what Happened to his Ex Girlfriend!! [LINK] Omg. I cant believe this actually happened to his Ex-Girlfreind!”

According to Sophos, friends of the user whose compromised account posted the message have also been named in it, assuring that at least some of them will surely check out the message.

Those that follow the link are asked to install a “Divx plugin” in order to see the video – which, by the way, is not even the same video they wanted to see: 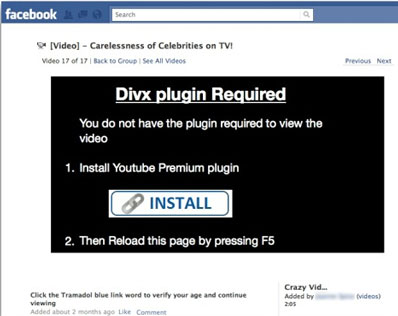 And, for good measure, they send the users to a site where they are told they need to complete the survey to watch the video. Needless to say, there is no video, and they have been duped into making money for the scammers.