Security researchers of US-based NQ Mobile have recently discovered what might be the first Android bootkit. Dubbed DKFBootKit, the malware piggybacks malicious payloads into legitimate apps that require root privilege.

“Specifically, by taking advantage of the root privilege, DKFBootKit adds itself as a part of the boot sequence of the original Android system and replaces a number of utility programs (e.g., ifconfig and mount),” claim the researchers. “By doing so, the malware can get started even before the entire Android framework is bootstraped.”

The apps targeted for repackaging with the malicious payload are mostly utility apps, but a few are also apps that provide license keys for some paid apps: 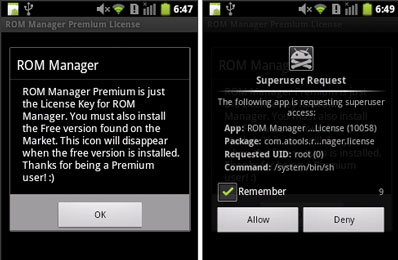 The malware’s final goal is to make itself run earlier than the Android framework, and to deliver a bot payload that connects the device to several C&C servers and waits to receive additional commands.

“It’s worth mentioning that because DKFBootKit utilizes the root privilege, it can execute arbitrary commands,” point out the researchers and warn users to be careful to download applications only from trusted sources and to review carefully the permissions asked by them.