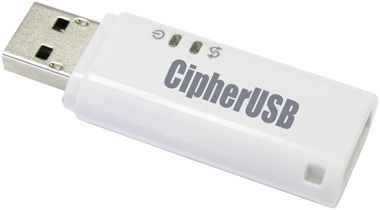 The drive will appear on your computer in seconds and is ready for use like an ordinary USB drive. There is no password to remember or software or drivers to install.

Data written to the USB drive or burnt onto Blu-ray, DVD or CD media is automatically encrypted on the fly with AES 256-bit hardware encryption. You can even mix encrypted/unencrypted burning sessions onto the same optical media. The encrypted drive is accessible on any computer with a USB port as long you have the matching CipherUSB.

The CipherUSB encrypts everything stored on a standard USB drive or flash media, including the MBR and partition tables. Access to the encrypted data is not possible without using the CipherUSB with the matching cipher code.

An encrypted hard drive or flash drive attached directly to a USB port will appear as a blank drive and the encrypted session in a Blu-ray, DVD or CD disc will become invisible.

Designed with a NIST certified crypto engine from Enova Technology, the CipherUSB leaves no trace of any cipher code in RAM or any part of the computer.

Each CipherUSB adapter comes with a software utility for programming personal key codes up to 32 characters long. This code is then secured with AES 256-bit encryption and stored inside the CipherUSB adapter.