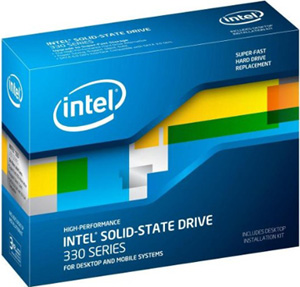 Offered in the most popular capacity points, 60GB, 120GB and 180GB, the Intel SSD 330 Series boosts overall system performance and responsiveness for a broad range of applications.

“An SSD is still the single best upgrade you can make to your existing PC, and the Intel SSD 330 Series gives users the latest Intel SSD technology at a price to meet their budget,” said James Slattery, product line manager for client SSDs, Intel Non-Volatile Memory Solutions Group. “Backed by Intel’s rigorous testing process, the Intel SSD 330 Series offers our users the speed they need at a great price, backed by world-class manufacturing, reliability and tech support.”

Unlike a traditional HDD with spinning disks and moveable parts, SSDs offer a more rugged, low-power storage solution that dramatically improves system performance to keep up with today’s I/O-intensive applications.

The Intel SSD 330 Series comes in a standard 2.5-inch/9.5mm form factor as a replacement to a slower-performing HDD. It can be used in a dual-drive desktop PC configuration to speed up boot times and applications speeds, or as a single-drive notebook upgrade.

Available beginning today at worldwide retailers and online e-tailers, the Intel SSD 330 Series is offered at the suggested channel price of $89 for a 60GB drive, $149 for a 120GB drive and $234 for a 180GB drive. It is also backed by a 3-year limited warranty.