A new Symantec report shows that while the number of vulnerabilities decreased by 20 percent, the number of malicious attacks continued to skyrocket by 81 percent.

In addition, the report highlights that advanced targeted attacks are spreading to organizations of all sizes and variety of personnel, data breaches are increasing, and that attackers are focusing on mobile threats. 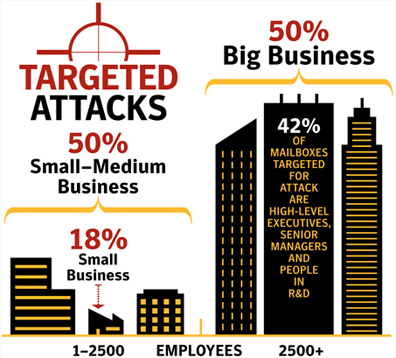 Symantec blocked more than 5.5 billion malicious attacks in 2011, an increase of 81 percent over the previous year. In addition, the number of unique malware variants increased to 403 million and the number of Web attacks blocked per day increased by 36 percent.

At the same time, spam levels fell considerably and new vulnerabilities discovered decreased by 20 percent. These statistics, compared to the continued growth in malware, paint an interesting picture. Attackers have embraced easy to use attack toolkits to efficiently leverage existing vulnerabilities. Moving beyond spam, cyber criminals are then turning to social networks to launch their attacks.

The very nature of these networks makes users incorrectly assume they are not at risk and attackers are using these sites to target new victims. Due to social engineering techniques and the viral nature of social networks, it’s much easier for threats to spread from one person to the next. 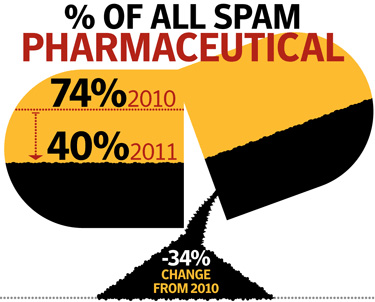 Targeted attacks are growing, with the number of daily targeted attacks increasing from 77 per day to 82 per day by the end of 2011. Targeted attacks use social engineering and customized malware to gain unauthorized access to sensitive information. These advanced attacks have traditionally focused on public sector and government; however, in 2011, targeted attacks diversified.

Furthermore, 58 percent of attacks target non-execs, employees in roles such as human resources,, public relations, and sales. Individuals in these jobs may not have direct access to information, but they can serve as a direct link into the company. They are also easy for attackers to identify online and are used to getting proactive inquiries and attachments from unknown sources.

Approximately 1.1 million identities were stolen per data breach on average in 2011, a dramatic increase over the amount seen in any other year. Hacking incidents posed the greatest threat, exposing 187 million identities in 2011—the greatest number for any type of breach last year. However, the most frequent cause of data breaches that could facilitate identity theft was theft or loss of a computer or other medium on which data is stored or transmitted, such as a smartphone, USB key or a backup device. These theft-or loss-related breaches exposed 18.5 million identities.

As tablets and smartphones continue to outsell PCs, more sensitive information will be available on mobile devices. Workers are bringing their smartphones and tablets into the corporate environment faster than many organizations are able to secure and manage them. This may lead to an increase in data breaches as lost mobile devices present risks to information if not properly protected. Recent research by Symantec shows that 50 percent of lost phones will not be returned and 96 percent (including those returned) will experience a data breach.

Mobile vulnerabilities increased by 93 percent in 2011. At the same time, there was a rise in threats targeting the Android operating system. With the number of vulnerabilities in the mobile space rising and malware authors not only reinventing existing malware for mobile devices, but creating mobile-specific malware geared to the unique mobile opportunities, 2011 was the first year that mobile malware presented a tangible threat to businesses and consumers. These threats are designed for activities including data collection, the sending of content, and user tracking.